Coal India Limited (CIL), a CPSE under the Ministry of Coal is keenly participating in the  Azaadi ka Amrit Mahotsav (AKAM) celebrations .  The 75 week long celebrations that began from March 2021 include numerous activities in which  people from all age groups are participating in large numbers to cherish and celebrate India’s  75 years of independence. Rich and varied   activities under five pillars of AKAM are being organized among all its subsidiaries located in different states and at its Headquarters in Kolkata. CIL has adopted the underlying theme of “Go Green,  Drink Clean” under the Resolve@75 pillar in which the thrust is on activities for creating awareness towards Environmental Conservation and Sustainable Development .

All the events from March this year were successfully organized keeping in mind the COVID-19  protocols and bringing out the theme of AKAM. During the first two weeks of August, CIL and its subsidiaries organized  a plethora of activities to give further fillip to the fervor of Independence.

During the first week of August an awareness session on personal hygiene and cleanliness was organized at Eastern Coalfileds Ltd. (ECL). Free sanitary napkins were distributed to school and college going girls in Basiapali village of Sambalpur district by Mahanadi Coalfields Ltd (MCL).   Besides organizing a session on “Role of Women in Independence” by Central Mine Planning and Design Institute (CMPDIL),  online quiz competition based on the theme of freedom was conducted  among employees of Western Coalfields Ltd. (WCL).  Furthermore, street plays, rallies and awareness talks by Northern Coalfields Ltd ( NCL), distribution of  large number of saplings at South Eastern Coalfields Ltd (SECL) were some of the highlights of  the activities held during the first week of August, 2021 . 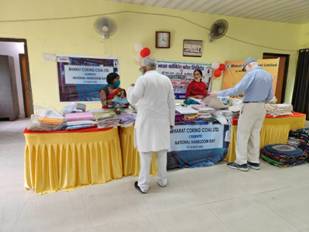 In the second week of August, 2021  on  the occasion of National Handloom Day, exhibitions were set up for sale of handloom products at Bharat Cocking Coal Ltd (BCCL) along with inauguration of Khadi and Handloom Centre in a village at NCL for creating self-employment opportunity for local women. Hundreds of saplings were distributed to workers, villagers and officials in all the sub-regions under SECL. Online Seminar on  “National Clean Air Programme and Challenges for Sustainable  Environment in Mining Areas” was also  organised at CIL.  In a programme linked to  Quit India Movement meant for  school students by ECL, more than  50 students and  100 executives participated. Massive plantation drive was also conducted by CMPDIL and ECL on 3.7 hecters of land.  A permanent Photo gallery set up  at WCL HQ, Nagpur highlighted the major events of August Kranti (Quit India Movement). Painting competition for school students based on Freedom Theme was yet another activity conducted during  the second week of August. Several activities have been planned for the coming days by CIL and its subsidiaries under the AKAM calendar including Online competitions in Photography and Painting. Launch of Koyla Darpan (Hindi Magazine of Coal India Limited- Azaadi ka Amrit Mahotsav) edition, distribution of  saplings under “Go Green Drink Clean”  theme, lecture series on “Iconic Movements of Indian Freedom Struggle”, distribution of Eco-Friendly bags to create awareness against single use plastic and its ill-effects on the environment,  the annual celebration of Independence Day at CIL and subsidiaries are also to be conducted. Other proposed activities   for August, 2021 include organizing cultural event on the theme of patriotism, felicitation of freedom fighters of Nagpur District by WCL and of nurses  and doctors  for their contribution during Covid pandemic,”Walk for Clean Dhanbad” at Bharat Coking coal Limited HQ,cleanliness drive / jute bag distribution / distribution of saplings, Wall paintings and  display Posters with message of Freedom Struggle- Independence  India .