In order to ensure wide participation and awareness for the Azadi ka Amrit Mahotsav, commemorating 75 years of Indian Independence, the Ministry of Information & Broadcasting has curated a series of innovative programmes to celebrate the Mahotsav under the overall spirit of “Janbhagidari and Jan Andolan”. The objective is to ensure involvement of the people in recalling the spirit of sacrifice and patriotism in the journey towards a New India. Media Units have outlined a series of synergistic programmes across the country through different modes and mediums.

One of the key aspects of the synergistic programming is to recall the contribution of freedom fighters including the ‘Unsung Heroes’ of the freedom struggle. All India Radio will be launching a unique innovative programme, “Azadi Ka Safar Akashvani Ke Saath” on National as well as Regional channels from 16th August, 2021. The five minutes daily capsule based on eminent freedom fighters and giving an account of major historical and political events of the day will be aired at 8:20 AM (Hindi) and 8:50 AM (English). Taking forward the spirit of Janbhagidari, AIR is also organizing “National and Regional Amrit Mahotsav theme Quiz from 16th August, 2021 (Hindi: 8 AM to 8:30 AM and English: 8:30 AM to 9 AM). 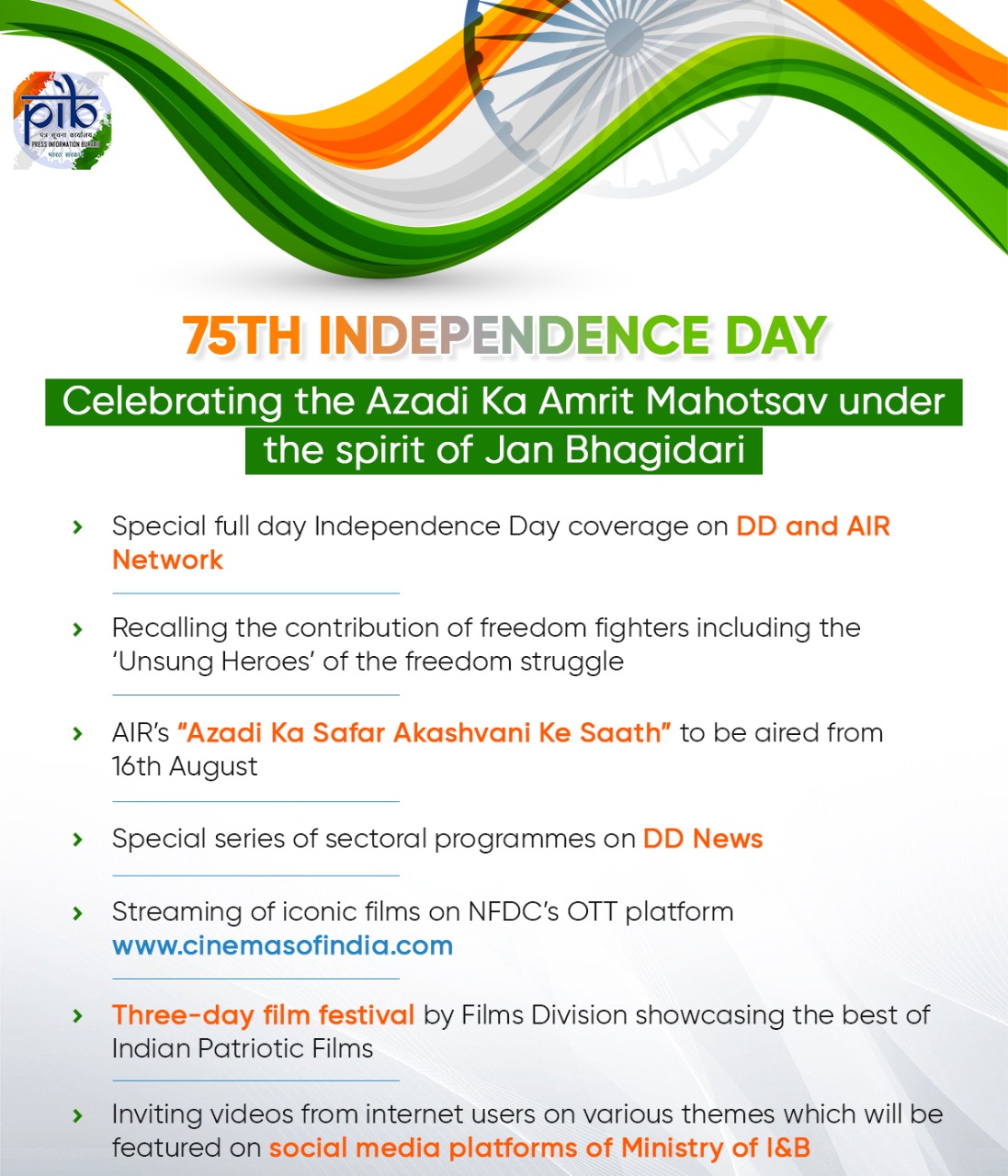 Starting from 16th August, 2021, DD Network will telecast a five minutes daily capsule giving an account of major historical and political events of that day. The programme will be telecast by DD News at 8:55 AM and DD India at 8:30 AM every day. Doordarshan has packaged a set of films which highlight the spirit of patriotism and sacrifice. Films like Hindustan ki Kasam and Tiranga will be showcased on 15th of August, 2021. A special series of sectoral programmes on themes such as Start-ups, Defense, Space and Landmark Legislations have also started broadcasting. DD will dedicate a full day of special coverage to Independence Day, including live telecasts from the Red Fort, along with special shows to mark the important occasion.

NFDC will be streaming iconic films like Gandhi, Making of Mahatma, Ghare Baire, on its OTT platform www.cinemasofindia.com from 15th to 17th August, 2021. During the same period, the Films Division will also commemorate the occasion with a three day film festival showcasing films on freedom fighters and the Indian freedom struggle. These film festivals will be organized in coordination with institutions across the country to reach out to a wider audience.

The Social Media platforms of the Ministry are also reaching out to the people through informative AV content on various aspects of India’s freedom struggle. In order to engage the youth and children, it is also inviting videos from internet users on various themes which will be featured on its platforms.