National Test House to venture in nano-technology through products like cosmetics, electronic consumer items and digital appliances used in homes

“National Test House (NTH) is an example of how India as a country has moved ahead with time in research, development, technology and all of it contributing to nation building and quality in every sphere of life,” said Ms LeenaNandan, Secretary Consumer Affairs, Ministry of Consumer Affairs, Food and Public Distribution while addressing a Press Conference on the significant role of NTH in country’s development on Tuesday.

The National Test House (NTH), a 109-year-old government quality assurance laboratory that provides material testing facilities for the industry, consumers and government agencies in all domains of engineering. NTH has 6 laboratories that are serving the country on quality assurance for industrial and economic growth.

The Government Test House (Today known as National Test House) was created in the year 1912 at Alipore in South Calcutta, and has contributed immensely to scientific theory, discoveries and practical product development.

It is important to mention here that the institute has witnessed dedicated works by several scientific luminaries. Dr. S. Venkateswaran and Dr. Krishnan, Scientists at NTH worked as research associates of Sir C.V. Raman and undertook tests and discoveries in NTH laboratories on the subject “Weak Fluorescence” of glycerine which led to the discovery of “Raman Effect”.  Sir C.V. Raman was awarded the Nobel Prize in Physics for the discovery of “Raman Effect” in the year 1930.   Sir C.V. Raman in his Nobel Prize winning speech at Swedish Academy in 1930 acknowledged the contribution of Dr. S. Ventakeswaran, Scientist at GTH (Now NTH) for discovery of the “Raman Effect”.

Be it the railway lines, wagons, coaches, high rise buildings, cement concrete, iron, steel bars, transformers or small consumer items like mixer grinder, oven, toaster, batteries,wires, cables, ropes, pressure cookers, the National Test House(NTH) has been tirelessly working to uphold quality and safety standards in the country of the items produced and imported in the country. It is supporting evolutionof new national standards, qualitative improvement in production lines of various industrial domains and is supporting the Aatmanirbhar Bharat programme.

The Secretary shared that in the last seventy-five (75) years, NTH had dedicated its services to various nation building projects and has carried out scientific testing and quality assessment of various Bridges, Road & Highways, Airports, Steel Plants, Refineries, Power Plant etc.

A presentation was also shared with the media persons. A total of 4 videos were shared through the presentation explaining how testing is done and quality assurance is achieved in products like gas burner, switches, flexible wires and document archiving. The process of welding and certification to the welders in the Chenab River Bridge Project in Jammu and Kashmir was also approved by NTH.

Dr. P Kanjilal, Director General, NTH was connected through video conferencing. He informed that presently, nearly 25,000 samples/products are being received for quality assurance by NTH laboratories annually of which around 60% are from government agencies, around 20-25% from Private agencies 15-25% from individuals.

NTH will also provide scholarshipsto meritorious students of Engineering / M.Sc. In this regard, an amount of Rs. 25000 per annum per student for undertaking research in the field of Nano Technology, electrical short-circuit technology, food safety, civil engineering vibrations study of bridges and buildingswill be given scholarship.

NTH plans to develop a Nano material testing laboratory which will help in assessment of the risks associated with consumer products containing nano material, especially in cosmetics, electronic consumer items and digital appliances used in homes. There is a vast market of nano materials expected to be developed and used in consumer industry especially, cell phones, electronic appliances, microwaves etc. whose quality testing work and assurance reporting NTH proposes to tap in the coming years. 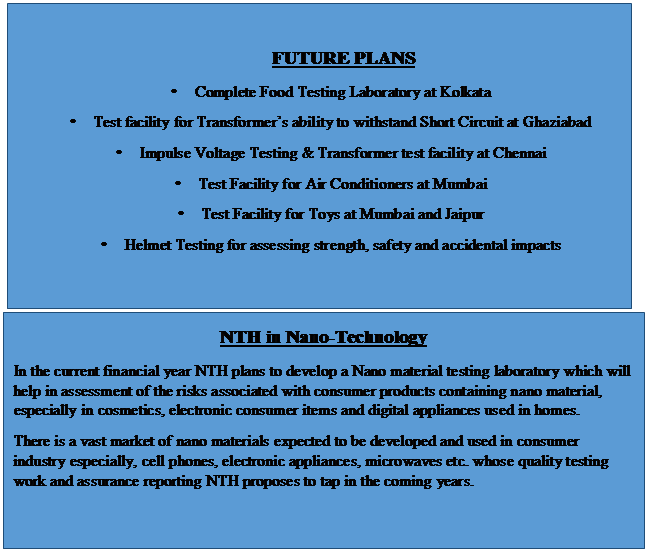 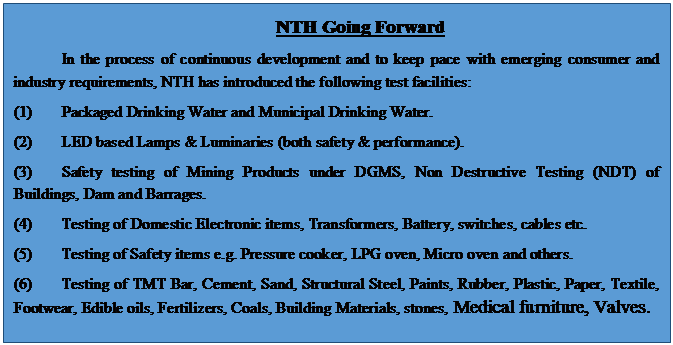 PM expresses gratitude to President, VP and other world leaders for birthday wishes