The Ministry of Jal Shakti through Gazette Notification dated15.07.2021 has notified the jurisdiction of Godavari River Management Board and Krishna River Management Board, which provide the required authority and power to the two Boards in terms of administration, regulation, operation and maintenance of listed projects in Godavari and Krishna rivers in the two States. This step is expected to ensure judicious utilization of water resources in the two states. 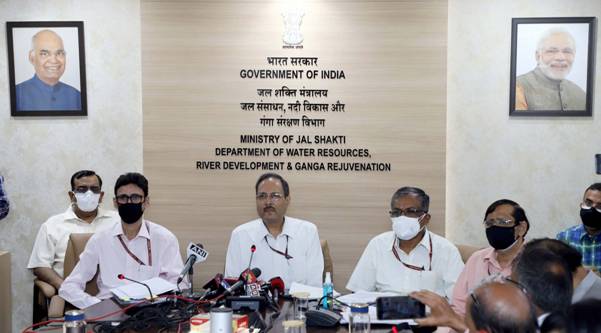 The Andhra Pradesh Reorganization Act 2014 (APRA) contains provisions for the effective management of river waters in the states of Andhra Pradesh and Telangana. Constitution of the Godavari and Krishna River Management Boards and the constitution of an Apex Council for the supervision of the functioning of these Boards, is laid down in this Act.

The Central Government in exercise of the powers conferred under Section 85 of the APRA, 2014, constituted the two River Management Boards effective from 2nd June, 2014 for the administration, regulation, maintenance and operation of such projects on Godavari and Krishna rivers, as may be notified by the Central Government.

The long pending issue of notifying the Jurisdiction of the two Boards was addressed in the 2nd meeting of the Apex Council held in October, 2020, under the Chairmanship of Union Minister, Jal Shakti,Shri Gajendra Singh Shekhawat. In this meeting, it was decided that the jurisdiction of GRMB and KRMB will be notified by Government of India.

In accordance with the provisions under Section 87 of APRA, 2014, Government of India has issued two gazette notifications, one for the jurisdiction of GRMB and the other for KRMB, for administration, regulation, maintenance and operation of projects in Godavari and Krishna river basins respectively, in the States of Andhra Pradesh and Telangana.

This decision of the Union Government for notifying the jurisdiction of two Boards would go a long way in enabling the River Boards to discharge their responsibilities to the fullest as mandated in the APRA, 2014 and bring about efficiency in management of water resources in the two States. The Centre expects the wholehearted cooperation and assistance of both the State Governments in the smooth functioning of the two Boards, to ensure equitable benefit to the people of both the states.