National Handloom Day being celebrated across the country,

A Committee to be constituted consisting of all weavers, trainers equipment makers , marketing experts and other stake holders to recommend ways and means to achieve the objective and improve all round progress,

Need to take Handlooms to Next level of Growth ¬- Shri Piyush Goyal,

Sector should become strong enough and prosper without depending much on State support- Shri Goyal,

Union Minister of Textiles, Commerce and Industry, Consumer Affairs & Food and Public Distribution Shri Piyush Goyal has said that steps needs to be taken to increase the production capacities of handloom sector from existing 60 thousand crore rupees to over one lakh 25 thousand crore rupees within three years. He added that target must be set to increase the export of handloom items from existing 2,500 crore rupees to 10,000 crore rupees in the next three years. Addressing an event on the occasion of 7th National Handloom Day here today, Shri  Goyal said that  nation is committed to ensure sustainable development of the handloom sector thereby empowering handloom weavers and workers financially and instilling pride in their exquisite craftsmanship.

The minister announced  that a  Committee will be  constituted consisting of all weavers, trainers equipment makers , marketing experts and other stake holders to recommend  ways and means to achieve the  objective and improve all round progress of handloom sector. He mentioned that handloom sector has a unique place in our cultural heritage. For centuries, it has been sustained by the inter-generational transfer of weaving and designing skills. He said  that it was in a Kolkata Town Hall meeting held on August 07, 1905 that the Swadeshi

Movement was launched which aimed at reviving domestic products and production processes. Shri Goyal added that to commemorate this historical occasion, and to celebrate our handloom tradition, Hon’ble Prime Minister Narendra Modi declared 7th August as National Handloom Day in 2015. In the 75th year of independence, Prime Minister Shri Narendra Modi has urged all of us as a nation to buy Indian Handloom products and showcase their grandeur by associating with #MyHandloomMyPride. The minister also urged people to buy at least one handloom item in order to promote weavers and handloom sector. Congratulating NHDC for setting up three Handloom Craft Villages  at Kovalam, Thiruvananthapuram, Kerala , Mohpara Village, District Golaghat, Assam and Kanihama, Budgam, Srinagar  in collaboration with the respective State governments,  the minister stated that it will not only  provide additional attraction for the domestic and international tourists but  also promote the well-known Handloom & Handicraft Products of the region leading to rise in weavers income. Shri Goyal also advised the Handloom Development Corporation to rejuvenate this sector with new ideas thoughts and latest technological advancements as per the changing requirements. He said that it is  very important  to think intelligently as to  how this sector can stand on its own feet without government’s support. He said, ‘by making ourselves Atmanirbhar, we can make India  Atmanirbhar.’ 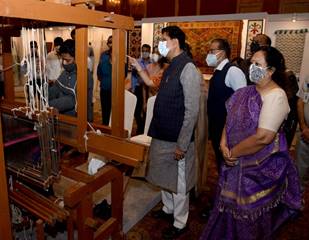 Speaking on the occasion Minister of State  for Textiles  and Railways Smt. Darshana Jardosh said  that it is a sector that directly addresses women’s empowerment with over 70% of all weavers and allied workers being female. She further said  that it is the responsibility of all of us to promote local artisans under the local for vocal initiative.

In his address Secretary Ministry of Textiles Shri U. P. Singh said that an e-commerce portal is being developed in coordination with Digital India Corporation (under MEITY) for handloom weavers and handicraft artisans. This will enable our weavers and artisans to sell directly to consumers. He  further said that in order to support the handloom sector and to enable a wider market, steps have been taken to on-board weavers onto the Government e-Market place (GeM). This step would enable weavers to sell their products directly to various Government Departments and organizations. So far about 1.50 lakh weavers have been on-boarded on the GeM portal, he added.

Shri Goyal and Smt. Darshana Jardosh also interacted with the weavers who came from different corners of the country to attend the National Handloom Day celebrations. An exihibition depicting rich variety  of  exquisite handloom products was also organized at Convention hall, Hotel Ashok where the function was held.

On the clarion call of the Prime Minister, National level – “My Handloom My Pride Expo” is being organized at Dilli Haat, INA, New Delhi from 1st August to 15th August 2021 by National Handloom Development Corporation (NHDC) to celebrate the 7th National Handloom Day. Handloom Producer Companies and weavers are   showcasing and displaying handloom products from handloom Clusters/pockets from across the Country for sale. 125 plus Handloom agencies/ National awardees belonging to 22 states are participating in the Expo. The exhibition will be open to public from 11 am to 8 pm for fifteen days upto August 15, 2021 and more than 10000 people are expected to visit the exhibition. Handloom products drawn from some of the exotic locations of India are on display and sale at the exhibition. From 7th to 11th August 2021  #MyHandloomMyPride Expo will also be organised by Handloom Export Promotion Council at Community Hall, New Moti bagh, near Hotel Leela Palace.