Over 1.7 crore registrations in a month at E-Shram portal-the National Database of Unorganized Workers.


Almost 50% of the workers registered are female

More than 78% of the registrations completed via Common Service Centres

We want everyone to register so that every worker is able to avail the benefits of government schemes: Shri Bhupender Yadav

Completion of one month of launch of e-Shram portal marks with the registration of more than 1.71 crores workers from the unorganized sector and in unorganized employment. As of 25th September, 1,71,59,743 workers have registered at the portal. 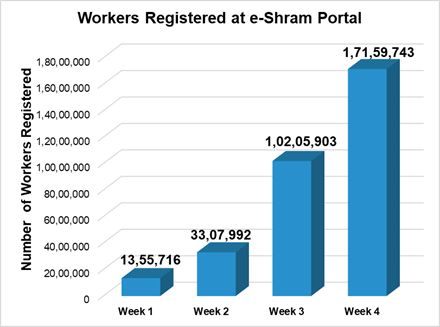 The e-Shram portal (https://eshram.gov.in/) was inaugurated on 26th August 2021 by the Union Labour and Employment Minister, Shri Bhupender Yadav in presence of Minister of State (Labour and Employment) Shri Rameswar Teli.  The portal is the first-ever national database of unorganised workers including migrant workers, construction workers, gig and platform workers. It facilitates extending benefits of social sector schemes to the workers in the unorganized sector. 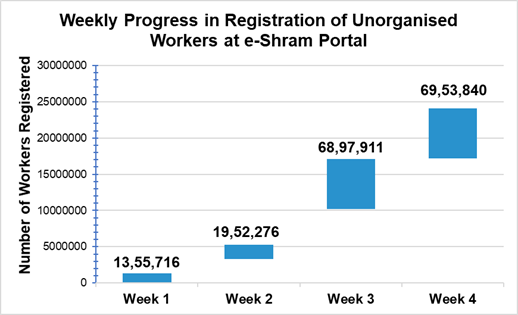 The figure above depicts the weekly progress of the registration exercise. Importantly, the drive has strengthened with the mobilization of workers achieving a greater mile each week. Compared to the 2nd week with over 19.52 lakhs registration, registrations in the third and the fourth week gained exponentially. In week 4, over 69.53 lakh workers registerd at the e-Shram portal.

Speaking on the e-Shram portal, the Minister expressed the desire that every worker in unorganized sector should get registered on the portal. “Registration is necessary, so that we know how many workers are there in each trade. More than 400 trades have already been represented on the portal. We want everyone to register so that every worker including those who perform very small work is able to avail the benefits of government schemes. Moreover, those who register on the portal now are eligible to get insurance up to Rs. 2 lakh.”

Shri Negi said that state governments, local self-governments, PSUs, app-based services employing gig workers, employers of unorganized sector will also have a big role in making the portal a success. The Commissioner also mentioned that, in line with the Prime Minister’s governance philosophy of Sabka Saath, Sabka Vishwas, Sabka Prayaas, trust of the workers and the efforts of all stakeholders are required in order to take the mission forward. 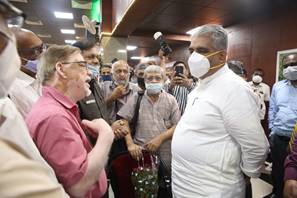 Interestlingly, almost 50% of the workers registered so far are female. There has been week-on-week improvement in the percentage of female workforce, registering themselves at e-Shram portal. The share of women workers drastically improved from around 37% in week 1 to almost 50% in the latest week,i.e. week 4.

Data analysis based on last week showed that a sustantial proportion of women workers in domestic work are getting themselves registered at the portal. This is one category of occupation where women outnumber men. Besides, women form substantial proportion of workforce in sectors like agriculture as labourers, food industries as helpers and machine operators, apparel industry as helpers and tailors and also in small scale units of tobacco/ beedi rolling and as ASHAs/ ANMs in the healthcare industry. Therefore, it would not be wrong to assume that most vulnerable group of women are insured under various protection schemes accruing from registration at the portal.

Since week one, Odisha and Bihar have competed with each other to maintain the first position. While Bihar slipped from 1st to 3rd rank, between week 3 and week 4, Odisha in three out of total four weeks, since the launch of portal, has successfully maintained the first rank in terms of registration of unorganized workers at e-Shram portal.

The e-shram portal is seeded with Aadhaar and will have details of name, occupation, address, educational qualification, skill types and family details etc. of the registered workers. This will thus enable optimum realization of their employability and enable them to avail benefits of government schemes.

Any worker who is working in unorganized sector and aged between 16-59, is eligible to register on the e-Shram portal. Migrant workers, gig workers, platform workers, agricultural workers, MGNREGA workers, fishermen, milkmen, ASHA workers, Anganwadi workers, street vendors, domestic workers, rickshaw pullers and other workers engaged in similar other occupations in the unorganised sector are all eligible.

October 1, 2021
7 Ways Instagram Models are Getting More Followers
2 hours ago