Union Minister of State for Rural Development and Consumer Affairs, Food & Public Distribution Ms Sadhvi Niranjan Jyoti arrived in Imphal on an official visit in the state on Monday.

The Union minister visited the state to review implementation of various Central sponsored schemes being implemented by her ministry in the state.

Addressing a press conference at Hotel Classic Grande Imphal, the Union minister said that a sea of changes were brought about in the developmental sector in the northeast region of the country under the Prime Minister Narendra Modi’s leadership. There has been marked improvement in almost all sectors, particularly in the road connectivity, healthcare and socio economy of the region as the Prime Minister is giving special emphasis to the region. 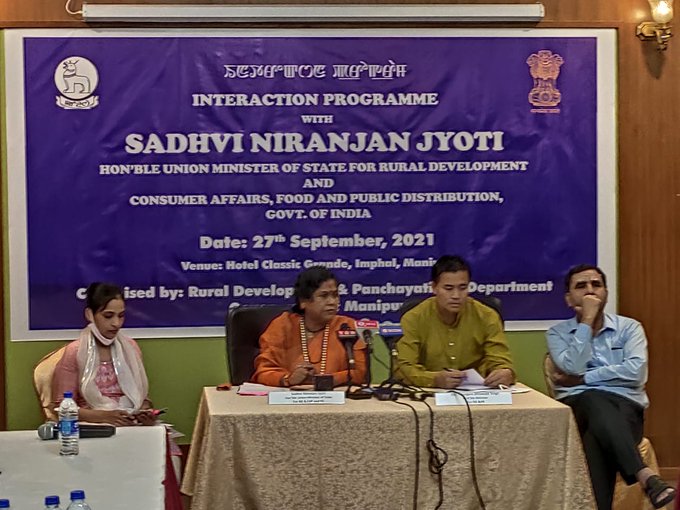 She said that the Prime Minister has a vision to convert the eight states in the region as the growth engine of the country.

The Union minister said that Covid-19 crisis had little impact on the socio-economy in the region as the Centre had assured of outreaching the benefits of various social security schemes to the deserving beneficiaries in the region under the guidance of the Prime Minister.

She said that the Central government ensured 100% of the benefits of almost all the social security schemes to the deserving beneficiaries even at the time of Covid crisis.

Informing that she came here to review the implementation of various schemes under her ministries, Jyoti said that she was satisfied with the manner in which various schemes, particularly MGNREGS under rural development department. She lauded the initiatives being taken up to improve rural road connectivity while providing jobs to the beneficiaries of MGNREGA. 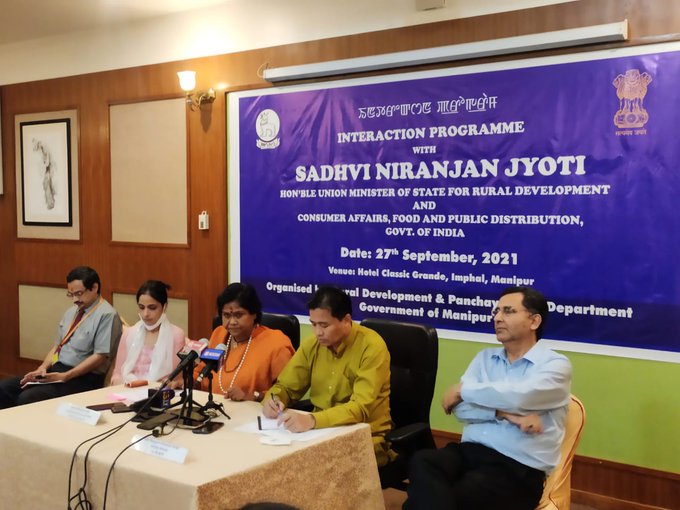 The Union minister said that MGNREGS helped a lot in the economy of the poor people in the rural areas at the time of COVID-19 crisis.

“I thank the concerned authority of the state government for its excellent performance in imparting jobs to job card holders in the state in this time of Covid crisis,” she said.

Jyoti said that India under the able leadership of Prime Minister Narendra Modi could fight the Covid effectively with the active support of the people.

She lauded the role being taken by the doctors, nurses and other healthcare workers and media in the fight against the pandemic.

However, tireless efforts of the Central government under the leadership of Prime Minister Narendra Modi with a commitment had brought about a remarkable transformation in the healthcare sector.