As part of the ongoing ‘POSHAN Maah’ which is being celebrated under the ‘Azadi Ka Amrit Mahotsav’, the Union Minister for Women and Child Development, Smt. Smriti Zubin Irani will attend a series of programmes at Imphal, Manipur on 11th and 12th September, 2021. 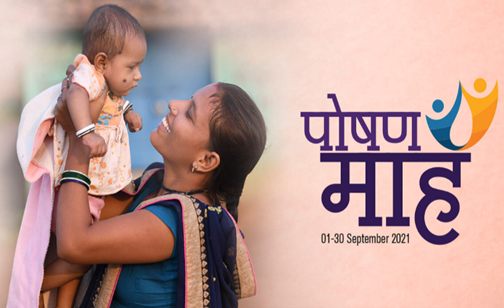 On 12th September, 2021, The Union WCD Minister will be the Chief Guest at an event on POSHAN Maah celebrations at District Panchayat Resource Centre inBishnupur district. The event will begin with the Plantation of medicinal plants and fruit bearing trees after which an Anaemia camp will be launched. After delivering the key note address at the event, the Union Minister will flag off the POSHAN Cycle Rally.

The other key event on 12th September will be held at INA, Moirang wherein the Union WCD Minister will interact with beneficiaries, AWWs, AWHs, Supervisors, CDPOs and DPO at INA Memorial Hall. The Union Minister will also flag off a POSHAN Walk.

POSHAN Abhiyaanis Government of India’s flagship programme to improve nutritional outcomes for children, adolescent Girls, pregnant women and lactating mothers. Launched by the Prime Minister Shri Narendra Modi on the occasion of International Women’s Day on 8 March, 2018 from Jhunjhunu in Rajasthan, the POSHAN (Prime Minister’s Overarching Scheme for Holistic Nutrition) Abhiyaan directs the attention of the country towards the problem of malnutrition and address it in a mission-mode.POSHAN Abhiyaan is a Jan Andolan or “People’s Movement” byincorporating inclusive participation of public representatives of local bodies, government departments of the States/UTs, social organizations and the public and private sector at large. In order to ensure community mobilization and bolster people’s participation, every year, the month of September is celebrated as POSHAN Maah across the country.

The Ministry of Women and Child Development has planned a series of activities throughout the POSHAN Maah-2021 in tandem with the States/UTs.The wide gamut of activities during the POSHAN Maahthis year broadly focus on Plantation Drive for POSHAN VATIKA by all the stakeholders in the space available at Anganwadis, School Premises, Gram Panchayats and other places. Plantation activity focuses on planting of saplings of nutritious fruit trees, local vegetables and medicinal plants and herbs. Sensitization/awareness drive for COVID vaccination and Observance of COVID Protocols are also being held, special drive for Height and Weight Measurement for Children (under 6 Years of Age), Slogan writing and Recipe competitions are being organized to highlight the locally available nutritious food for pregnant women. The activities during POSHAN Maah also include Awareness campaign on importance of regional / local food, Distribution of Nutrition Kits comprising of regional nutritious food, Anaemia Camps, Drive for block wise Identification of SAM Children, Supervised Supplementary Feeding Program for SAM children as an initiative to tackle prevalence of SAM in children up to the age of 5 years, Sensitisation for Community Management of Acute Malnutrition and Distribution of nutritious food for SAM children.