Border Roads Organisation (BRO) kick-started its celebrations of ‘Azadi Ka Amrit Mahotsav’, commemorating 75 years of India’s Independence. To mark this momentous occasion, BRO is organising nationwide welfare and patriotic activities/events including 75 medical camps, plantation drives at 75 locations and 75 School Samvad to motivate children through interactions & lectures. The main event would be the unfurling of National Flag on Independence Day at 75 Highest Passes of India.

On August 07, 2021, BRO felicitated the Gallantry Award winners and War Heroes at Pipalkoti & Pithoragarh in Uttarakhand and Chandmari in Sikkim. In a ceremony organised by Project Hirak of BRO at Pithoragarh, tokens of appreciation were awarded to the next of kin of Shaurya Chakra awardees – EEM Prem Singh, Naik Chandra Singh, Driver Ram Singh and DME Damar Bahadur. In a separate ceremony at Pipalkoti, Project Shivalik of BRO felicitated the next of kin of Major Preetam Singh Kunwar, Kirti Chakra; Lance Naik Raghubeer Singh, Shaurya Chakra (Posthumous) and Naib Subedar Surendra Singh, Shaurya Chakra. 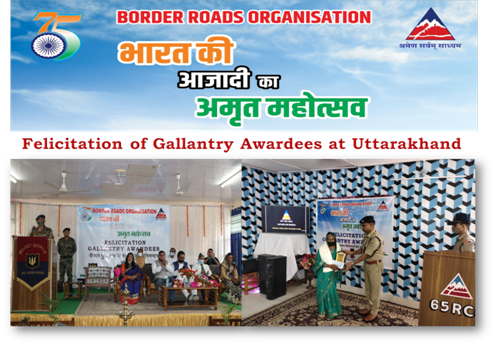 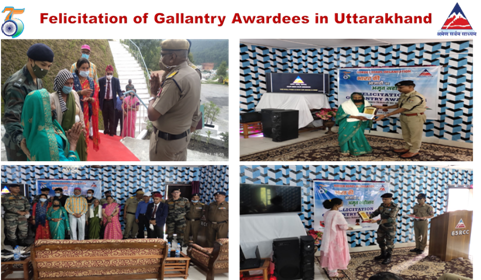 at Chandmari in Sikkim, the felicitation ceremony, organised by Project Swastik of BRO, was graced by Minister of Forest and Environment, Government of Sikkim Shri Karma Loday Bhutia. He felicitated three Shaurya Chakra award winners of Sikkim – Subedar Honorary Captain Kishore Rai, Naik Dhan Bahadur Chhetri and Para trooper Sonam Tshering Tamang. The locals of the state, who registered themselves on the online Gallantry award portal, were also felicitated. All the events were attended by key personalities from the state and included motivational talks and tales of valour of the War Heroes.