A youthful mind, body and soul is key driver of a healthy and fit India: Shri Anurag Thakur

Fit India Freedom Runs will be organized in nearly 750 Districts, 75 villages in each of the Districts across the country: Anurag Thakur 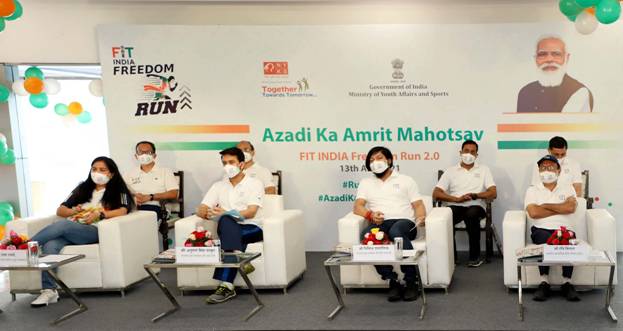 While the Union Minister flagged off the Freedom Run from Delhi’s Major Dhyan Chand National Stadium and participated in the Freedom Run at the stadium, the event was also held at 75 other locations across the country, including iconic locations such as the Cellular Jail in Port Blair; Kaza Post in LahaulSpiti; Mumbai’s Gateway of India and the Attari Border in Punjab among many others. 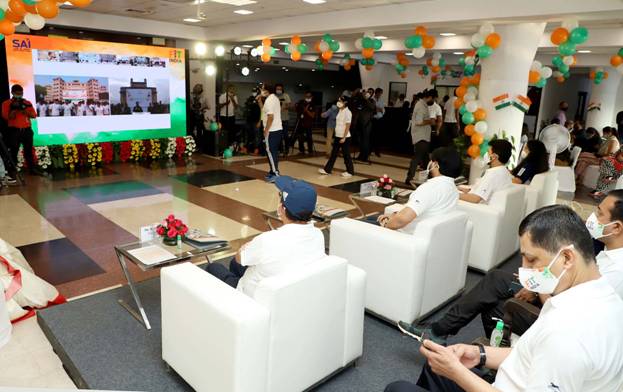 The event was kicked off by Culture Ministry putting up a Marshall dance performance celebrating the velour of our freedom fighters and followed by the ministers virtually interacting with the members of the armed and paramilitary forces and Nehru Yuva Kendra Sangathan (NYKS) volunteers across the country and appreciating them for not only protecting the country but also encouraging the youth to take up fitness as a regular part of their lives.

Interacting with participants at various iconic locations across the country, the Sports Minister said that as India celebrates 75 years of Independence, the Fit India Freedom Run 2.0 campaign is being organized as part of Azadi Ka Amrit Mahotsav. He added that the Freedom Run event will also connect the country with their national heroes who got India its freedom. In the next 25 years what shape and direction our nation will take depends upon how fit we are, the Minister opined. The Minister reiterated, “A youthful mind, body and soul is key driver of a healthy and fit India’.Only a ‘Fit India’ will make a ‘Hit India’, the Minister added. Shri Anurag Thakur urged every citizen to become a part of the movement, “The Prime Minister has exhorted all to make Fit India ajanandolan which is possible only through people’s participation. I urge everyone to choose a place and pace of their liking and become a part of this historic movement.”

While interacting with SSB personnel from Assam,  Minister Shri Anurag Thakur said that as India is celebrating 75 years of independence, people from 75 places will join the movement and it will reach to every person.BSF personnel joined from Attari border and during interaction the Minister asked BSF personnel to take the Fit India movement to every village as India celebrates its Azadi Ka AmritMahotsav.The CRPF personnel joined from Azad Park in Allahabad. Minister of state for Youth and Sports Affairs, Shri NisithPramanik in his interaction thanked the personnel for participating in the Fit India Movement  and called for realizing the Prime Minister’s dream of New India, aFit India. Later while talking to the media Shri Anurag Thakur said “We launched the Fit India Freedom Run 2.0 today to celebrate the Azadi ka Amrit Mahotsav and to encourage the youth of the nation to take up fitness. The run is being organized at 75 iconic locations across the country, who will further take it to 75 villages in nearly 750 districts of the nation and promote the Fitness ki Doze, AadhaGhunta Roz campaign. With this, we aim to take the Prime Minister’s Fitness Movement to every part of the country and make it a mass fitness movement.  The Freedom Run will start on August 15th and will go on till October 2nd, 2021. With this, we aim to reach more than 7.50 crore youth and citizens across the country.” Speaking on the occasion Shri NisithPramanikthanked all the participants of the event and said that dream of Prime Minister Shri Narendra Modi’s is to make New India a Fit India and this Fit India Freedom Run 2.0 will play a pivotal rolein making the dream come true. Secretary, Sports Shri Ravi Mittal said that each week Fit India Freedom Runis being held in 75 districts and at 75 villages in each district till 2nd October 2021. The aim of the campaign is to encourage people to take up fitness activities such as running andsports in their daily life.

Prominent people, Public Representatives, PRI leaders, social workers, sports persons, mediapersonalities, doctors, farmers and Army personnel are being requested to participate,encourage and motivate the people by gracing these events at various levels. Events are beingorganized physically and virtually all across the country by following the COVID-19protocols.