The Madras Legislative Council had sown seeds of a fully representative democratic form of governance which were realised after Independence: President Kovind

The Madras Legislative Council had sown seeds of a fully representative democratic form of governance which were realised after Independence, said the President of India, Shri Ram Nath Kovind. He was speaking at the commemoration of the 100th year of the Madras Legislative Council in Chennai today (August 2, 2021). He also unveiled a portrait of the former Chief Minister of Tamil Nadu, Dr Kalaignar M. Karunanidhi in the premises of the Legislative Assembly of Tamil Nadu on the occasion.

The President said that the Madras Legislative Council enacted many forward-looking legislations and also underwent many changes in its early decades. That spirit of democracy remains the guiding light of the state legislature. It would not be wrong to say that this legislature became the fountainhead of many progressive legislations which were subsequently replicated across the country to empower the weaker sections of society and strengthen democracy. This legislature can rightly be credited with nurturing the roots of democracy by focussing on governance to uplift the poor and purge social evils. Politics and governance in the region evolved around positive and rational content that targeted the welfare of those living on the margins. Abolition of the Devdasi system, widow remarriage, mid-day meals in schools and distribution of agricultural land to the landless were some of the revolutionary ideas that transformed the society. The concept of the welfare state has taken deep roots in this legislature irrespective of who rules here. Remembering the former Chief Minister of Tamil Nadu, Dr Kalaignar M. Karunanidhi, the President said that ‘Kalaignar’ started his political career right in his early teenage years, when India was still fighting for freedom, and he left us only recently. When as a young boy fired by ideals he had started working for the downtrodden, India was in the shackles, exploited under foreign rule for long years, stricken by poverty and illiteracy. When he breathed his last, he must have been satisfied that this land and its people had made astounding progress and development on all fronts. He must have been satisfied too, as he spent every waking hour of his long and productive life in the service of the people of the state and also of the nation.

Referring Karunanidhi’s contributions to Tamil literature and cinema, the President said that there are very few political leaders who are so passionate about language. For Karunanidhi, his mother-tongue was the object of worship. The President said that Tamil, of course, is one of the greatest and the oldest languages of humankind. The whole world takes pride in its rich heritage. But it was Karunanidhi who ensured that it was granted official recognition as a classical language. Kalaignar was a leader in a class of his own. He was among the last links we had with the stalwarts of our national movement. 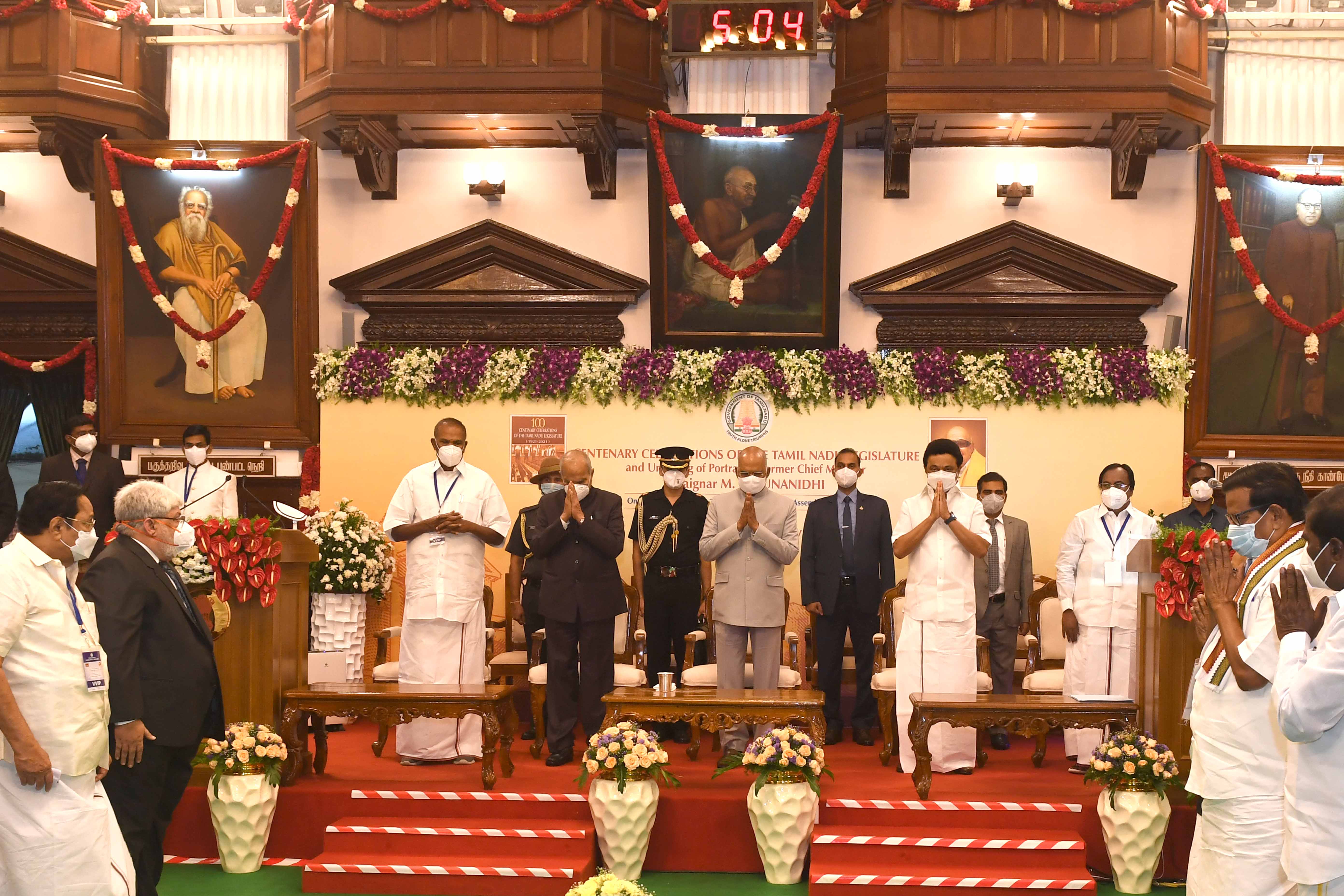 The President said that as the nation celebrates the 75th anniversary of Independence, he would like to remember stalwarts of the national movement. Our national movement spans from 1857, or even before, to 1947. During these decades, there were radicals and revolutionaries. There were pacifists and constitutionalists. They had different methods and they had different visions. But they were united in their reverence for the motherland. Each, in his or her own way, strove to serve Bharat Mata. Like different tributaries coming together in a river, they all came together for the cause of national independence.

The President said that they found a confluence in Gandhiji. Mahatma Gandhi not only personified all that was best in our culture and tradition, but he also improved upon the ideas of several western thinkers. Alongside him was a legion of patriots – lawyers, scholars, social reformers, religious and spiritual leaders and others. Each of them was matchless. Think of Dr. B. R. Ambedkar: such a towering genius and such a visionary! But for each name written in history books, there were countless others whose names were never recorded. They sacrificed comforts, even careers, and sometimes their lives, so that we could live in a free nation. 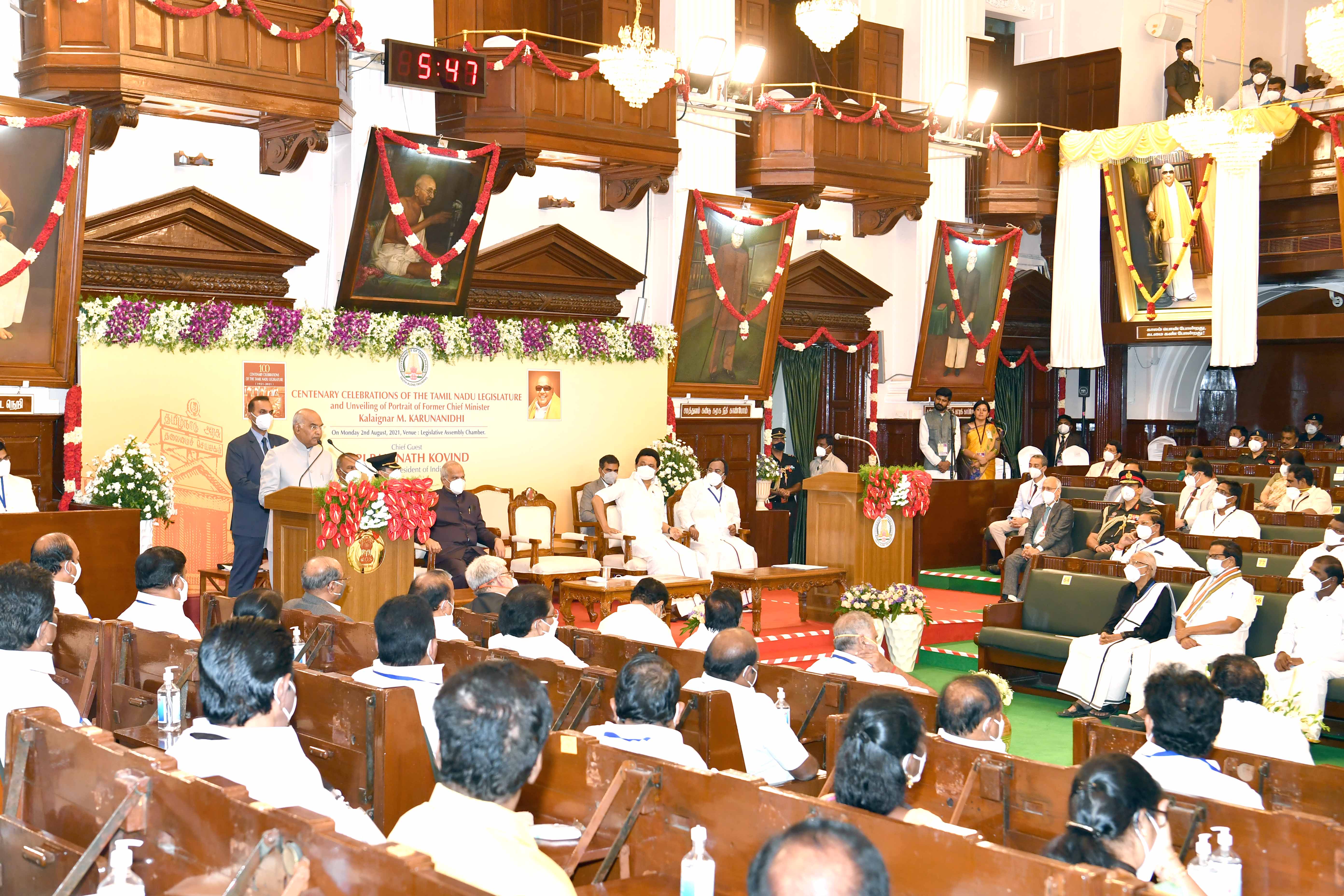 The President said that those few decades produced some of the greatest generations ever seen on the face of earth. To them, this country would ever remain in debt. To them, the only tribute we can pay is to be continuously inspired by their lives and their ideals. They gave us the gift of freedom but they also gave us responsibility. Their vision has been taking shape, but it is an ongoing process. Just as they each played their own part, we each have to play our part in taking the nation to new heights.

The President urged the youth to continuously engage with the past in order to understand the present and progress in the future. He said that in the lives of Mahatma Gandhi, Subramania Bharati and others, they would find answers to questions that are arising in their minds. The President said that he found that the young generation is more and more interested in our recent history. They give him the hope that the work that began with the known and unknown freedom fighters would continue. That India, with its wisdom, would show the way to the world in this century.