The Indian Astronomical Observatory (IAO) located at Hanle near Leh in Ladakh is becoming one of the promising observatory sites globally, said a recent study. This is due to its advantages of more clear nights, minimal light pollution, background aerosol concentration, extremely dry atmospheric condition, and uninterrupted by monsoon.

Astronomers are constantly searching for ideal locations around the world to build their next big telescope based on local meteorological data collected over many years. Such studies are crucial in planning for future observatories and the prediction of how they will vary with time.

Researchers from India and their collaborators carried out a detailed study of the night time cloud cover fraction over 8 high altitude observatories, including three in India. They used reanalysis data, combined from assimilation and observation extending over 41 years, along with 21 years of data from satellites. The study classified the quality of observable nights for different astronomical usages like photometry and spectroscopy on a daily basis.  They analysed datasets for the Indian Astronomical Observatory (IAO) in Hanle and Merak (Ladakh), and Devasthal (Nainital) in India, Ali Observatory in the Tibet Autonomous Region in China, South African Large Telescope in South Africa, University of Tokyo Atacama Observatory and Paranal in Chile, and the National Astronomical Observatory in Mexico. The team found that the Hanle site which is as dry as Atacama Desert in Chile and much drier than Devasthal and has around 270 clear nights in a year and is also one of the emerging sites for infrared and sub-mm optical astronomy. This is because water vapour absorbs electromagnetic signals and reduces their strength.

The research led by Dr. Shantikumar Singh Ningombam of Indian Institute of Astrophysics (IIA), Bangalore, and scientists from Aryabhatta Research Institute of Observational Sciences (ARIES) in Nainital, autonomous institutes of the Department of Science & Technology (DST), Government of India and collaborators from  St. Joseph’s College, Bangalore, and the National Institute of Meteorological Sciences, South Korea, University of Colorado and Chemical Sciences Laboratory, NOAA, USA has been published in the Monthly Notices for Royal Astronomical Society (MNRAS).

They found that Paranal, located in a high-altitude desert in Chile, to be the best site in terms of clear skies with around 87% of clear nights in a year. IAO-Hanle, and Ali observatories, which are located around 80 km from each other, are similar to each other in terms of clear night skies. They found that Devasthal has a slightly larger number of clear nights compared to the other sites in the sub-continent but are affected by monsoons for about three months in a year. However, night observations at IAO-Hanle from 2m-Himalayan Chandra Telescope (HCT) are possible throughout the year without any interruption due to monsoons. Due to the advantages of more clear nights, minimal light pollution, background aerosol concentration, extremely dry atmospheric conditions, and uninterrupted by monsoon, this region is becoming one of the promising sites globally for the next generation of astronomical observatories.

On the other hand, the cloud cover fraction for Hanle, Merak, and Devasthal in India and Ali in China were 66-75%, 51-68%, 61-78%, and 61-75%, respectively at various time resolutions using satellite-era and reanalysis data. Studying the variation of atmospheric parameters from 1980 to 2020 for all sites, the researchers found decreasing trends for the cloud cover fraction over the central region of Africa, the Eurasian continent, and the American continents, but increasing trends in the maritime region as well as land regions in the Sahara Desert, the Middle East, Indian sub-continent, the Tibetan Plateau and some of the Southeast Asian islands. This was possibly caused by global warming and associated water vapour changes in land-oceanic regions.

After examining several years of data of various astroclimatological parameters, IIA had installed the 2-meter aperture Himalayan Chandra Telescope (HCT) at Indian Astronomical Observatory (IAO), Hanle, during 2000. Thereafter, due to the uniqueness of this site, several astronomical telescopes operating at optical and infrared wavebands have been installed at Hanle by several Institutes in the country.

“In order to plan for future observatories, such detailed analysis of data from multiple sites over many years and the prediction of their variation with time are crucial,” said Dr. Shantikumar Singh Ningombam of IIA, the lead researcher of the study. 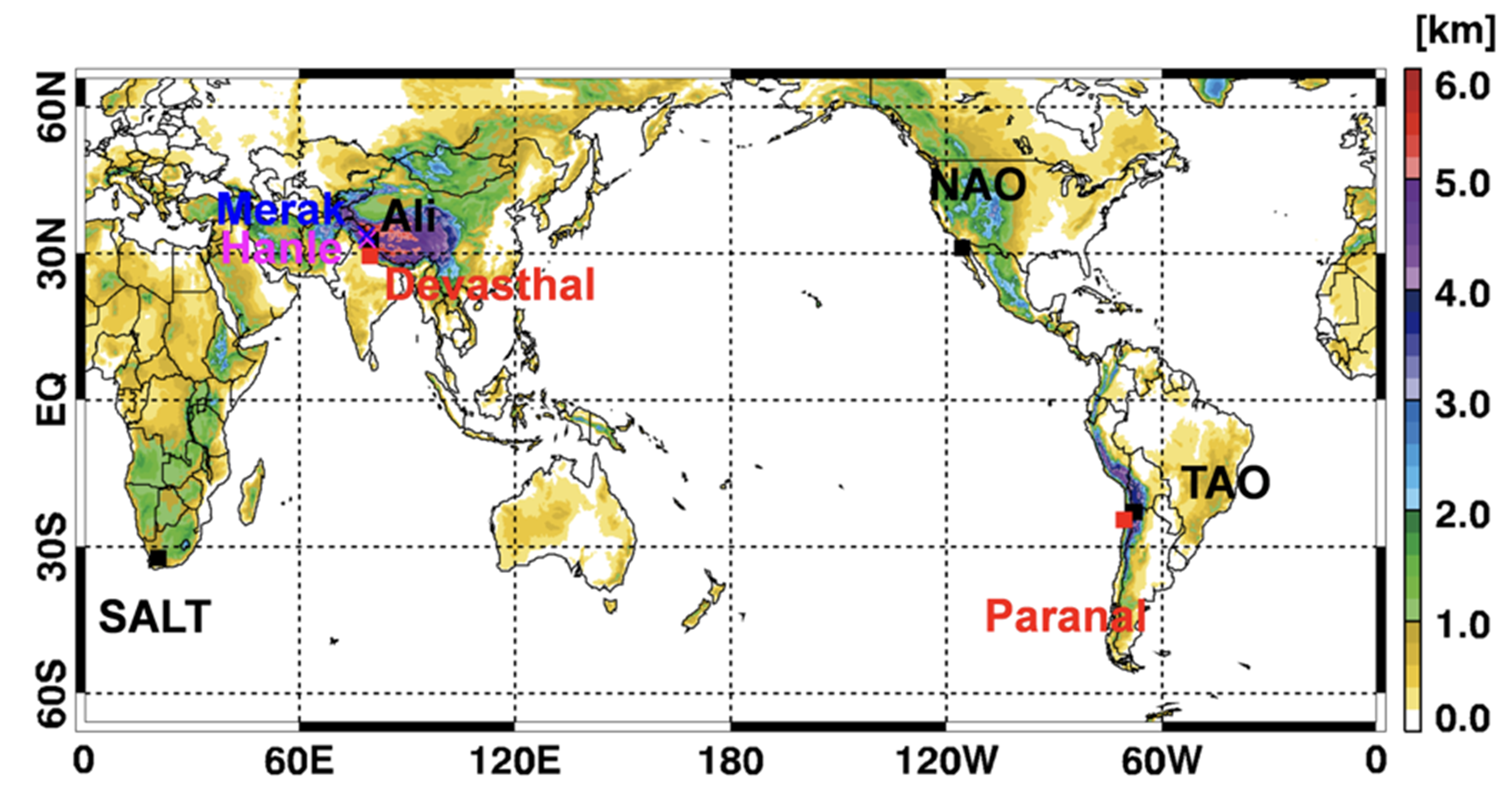 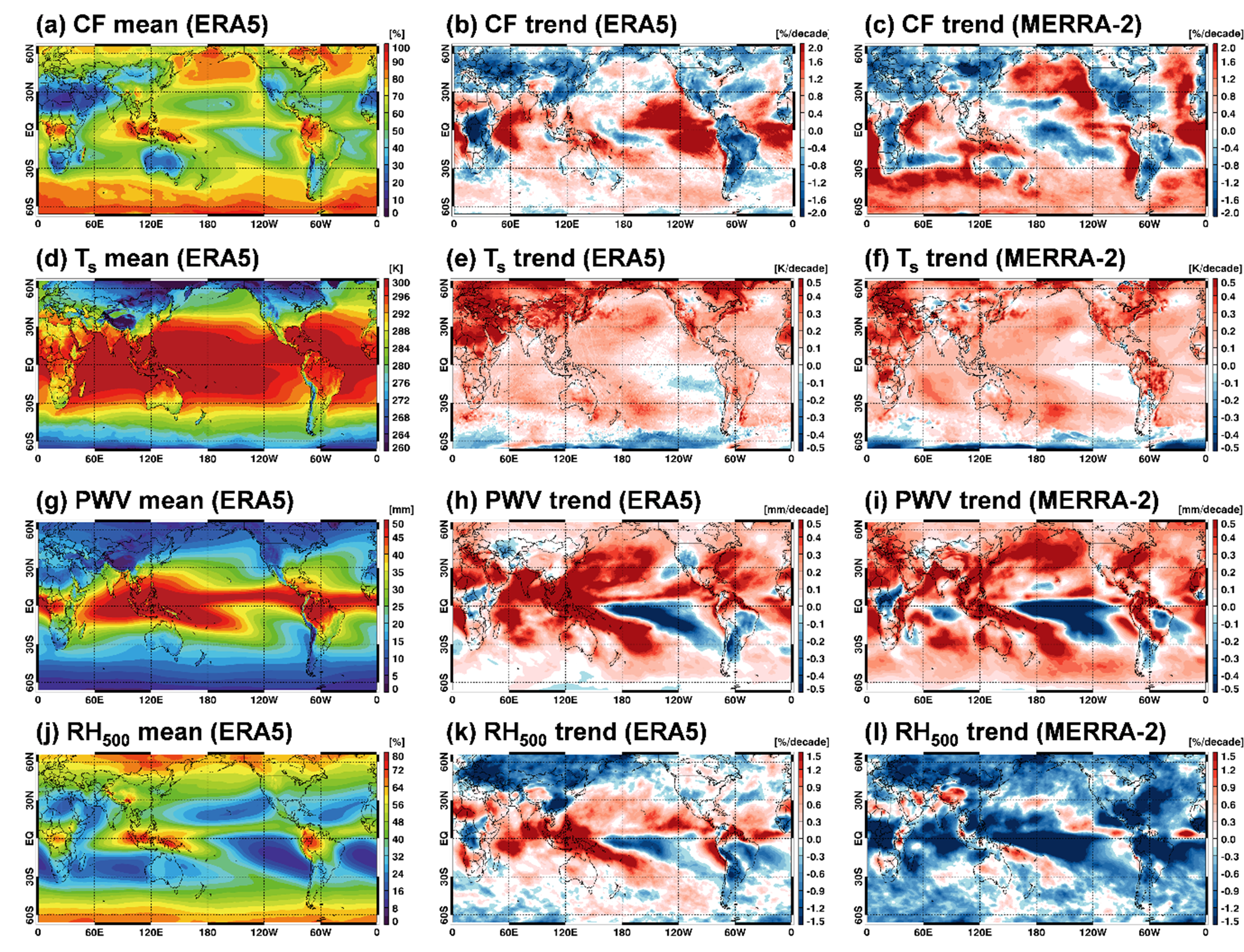 Figure 2: The four rows are the derived maps of average cloud cover fraction, surface temperature, precipitable water vapour in mm, and relative humidity. The first column is the average value, and the 2nd and 3rd columns are the trends of these quantities with time, from ERA5 and MERRA-2 datasets, respectively, over a 41 year period.