The Government of India has been taking several steps to develop innovative technologies and their dissemination from Lab to Land to empower rural youth, farmers and farm women. This was stated by the Union Minister of Agriculture and Farmers Welfare, Shri Narendra Singh Tomar in the 6th meeting of Agriculture Ministers of the member countries of Shanghai Cooperation Organization (SCO). 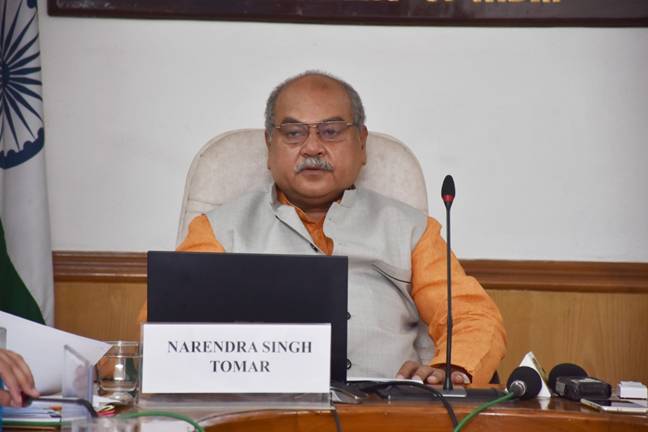 The Minister in the meeting organized virtually in Dushanbe, Tajikstan stated that the agriculture sector in India performed well even during the severe Covid-19 pandemic. Along with food production, exports have also registered significant growth, contributing to global food security. Speaking on the occasion, Shri Tomar mentioned that the Government is determined to attain sustainable development goal to end hunger, achieve food security and nutrition. He further emphasized that the bio-fortified varieties are a source of staple diets, rich in micro nutrients and are being promoted to address the aspects of malnutrition in the country. Further, he expressed that the Government with the goal to double farmer’s income by 2022 has launched several programs to enhance optimal utilization of water resources, create new infrastructure for irrigation, conserve soil fertility with balanced use of fertilizers, provide connectivity from farm to market, Information and Communication Technology(ICT) linkage besides building infrastructure, organic farming etc.

The Agriculture Minister said that India has achieved several milestones towards success in agriculture sector. Besides the Green Revolution, the White Revolution, blue revolution, the Public Distribution System and price support system for farmers are unparallel in the World. It was the result of the vision of policy makers, ingenuity of our agricultural scientists and the hard work of our farmers that India became not only self-sufficient but surplus in food grains. Today, India is a leading producer of several food commodities like cereals, fruits, vegetables, milk, eggs and fish.

Agriculture has always been a high priority for India, as is for the world. The COVID 19 pandemic has further put the spotlight on the sector given its implications on food security and supply chains. There is a necessity for a closer interaction and sharing of knowledge among countries to keep the food supply chains functional and protect the livelihoods of the farmer producers.

India with her tremendous growth trajectory in the field of agriculture will continue to share best practices and build capacities of other developing countries, both bilaterally as well as through collaboration with international organizations so as to enable them to also become self sufficient and to ensure food security.

India is a full member of the SCO and has played significant role since being a member of SCO. India values and honors its relationship with SCO in promoting multilateral, political, security, economic and people-to-people interaction in the region. It is important to organize the SCO Agriculture Ministers’ meeting on strengthening cooperation in food security and nutrition especially in this challenging time of COVID-19 pandemic. Considering that COVID 19 pandemic may have long term implications on food security and supply chain, there is need for close interaction and cooperation among countries to keep the normal functioning of the food supply chain to safeguard food and nutritional security.