Indian researchers have developed a unique technology for direct generation of Hydrogen from agricultural residue. This innovation by Indian researchers can promote eco-friendly hydrogen fuel-cell electric vehicles by overcoming the challenge of hydrogen availability.

India has set a target of 60% renewable energy of about 450 GW by 2030. To achieve this feat, in the current scenario, researchers all over the world are working towards renewable energy solutions which should be sustainable with a limited carbon footprint. One of the most economical ways to achieve this is to produce hydrogen from a cheap, abundant, and renewable source. Agricultural waste, which faces a great challenge for disposal, could be one of the sources of hydrogen production, and this could solve the dual problem of energy generation and waste disposal.

A team of researchers from Agharkar Research Institute, Pune, an autonomous institute of the Department of Science and Technology (DST), GOI, in collaboration with Sentient labs of KPIT Technologies, have developed this technology at lab-scale to extract hydrogen from agricultural residues.

“Our technology is 25% more efficient as compared to conventional anaerobic digestion processes used today. The two-stage process eliminates the pretreatment of biomass, thus making the process economical and environment friendly. This process generates a digestate that is rich in nutrients which can be used as an organic fertilizer,” said Dr. Prashant Dhakephalkar, Director of the ARI.

A team of scientists, Dr. S.S. Dagar and Pranav Kshirsagar from MACS-ARI and Sri Kaustubh Pathak from KPIT-Sentient, contributed significantly towards the development of the process. The developers of the technology explained that the hydrogen fuel generation process comprises the use of a specially developed microbial consortium that facilitates biodegradation of cellulose- and hemicellulose-rich agricultural residues, such as biomass of paddy, wheat, or maize, without thermo-chemical or enzymatic pretreatment. The process generates Hydrogen in the first stage and Methane in the second. The methane generated in the process can also be used to generate additional hydrogen, they added.

“This breakthrough of generating hydrogen from unutilized agricultural residue will help us to become self-reliant on energy resources. It will also add a major stream of revenue to the farmer community,” said Ravi Pandit, Chairman, Sentient Labs.  An Indian Patent application has been filed to protect the IPR. 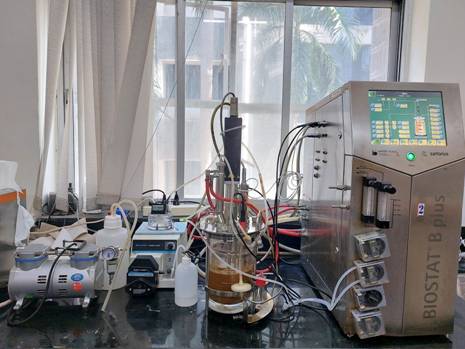