CMTCs would help in building knowledge, skills and attitude of the SHG members, leaders and cadres for effective performance of the Model Cluster Level Federations (CLFs)

DAY-NRLM is implementing Model Cluster Level Federation (CLF) strategy across the country to create “Proof of concept on promotion of member owned, member managed, member controlled and financially sustainable SHG federations” and develop social capital for replication of the strategy in the remaining blocks. Thus, these MCLFs are expected to be resource institutions and demonstration sites for other CLFs to emulate.

In order to achieve this goal, the Mission envisages establishing at least one Community Managed Training Centre (CMTC) per district managed by one of the Model CLFs in the district, so that it would cater to the capacity building needs of all the CLFs in the district. These CMTCs would help in building knowledge, skills and attitude of the SHG members, leaders and cadres for effective performance of the Model CLFs and member CBOs. 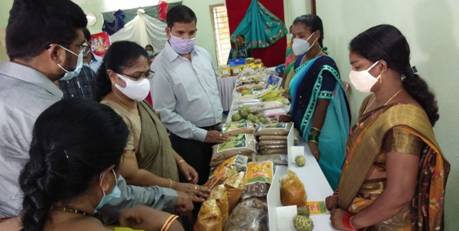 An Exhibition at CMTC attended by District Collector on Amrit Mahotsav, Vijayanagarm dist of Andhra Pradesh

Various activities like – Rangoli on Covid–19, oath taking and awareness program for Women and Elderly SHGs, distribution of plants from nurseries to SHGs members to plant the trees to support the go-green concept,  orientation on legal issues to women and elderly,  rallies on nutrition, Covid -19 protection measures like wearing masks and social distancing, vaccination etc. preparation of action plans of CMTCs and presentation, speech competition for SHG members, training on Nutrition, sanitation etc  were organised  by States during the week. 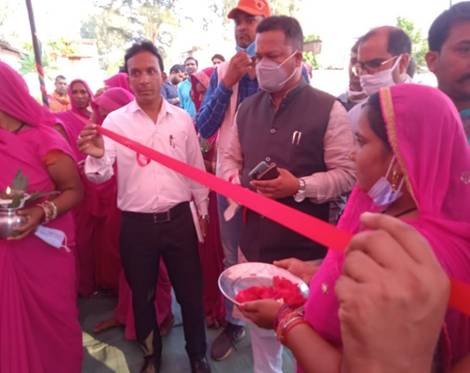 Large number of SHG members participated in the ceremony of inauguration of CMTCs. The occasion was graced by eminent public representatives – Chief Minister in Jharkhand, Member of Parliament in Gujarat, State Ministers in Chhattisgarh, Assam and Karnataka graced the occasion and inaugurated the CMTCs. District collectors, along with department officials, chaired the function at many places. Sarpanch and Panchayat representatives too participated in the ceremony and graced the occasion. CMTC inauguration by Member of Parliament at Dahod district, Gujarat