Today, two distribution camps and two assessment camps have been organized by Ministry of Social Justice & Empowerment, Government of India for empowering marginalized Divyangjan and for the ease of daily living to Senoir Citizens by providing them with Aids and Assistive devices. First Distribution camp was organized in Kanpur (UP)  for distribution of aids and assistive devices to ‘Divyangjan’ under the ADIP Scheme and to Senior Citizens under the ‘Rashtriya Vayoshri Yojana’ of the Ministry of Social Justice and Empowerment, Government of India. It has been organized by ALIMCO which is a Public Sector Enterprise under Administrative control of Department of Empowerment of Person with Disabilities ( Divyangjan), Govt. of India at Golden Palace, Sarojini Nagar, Kanpur. Shri Satydev Pahuri, Member of Parliament, Kanpur Nagar, Ms Neelima Katiyaar, Minister of State for Higher Education and Science & Technology Education, Government of Uttar Pradesh along with other dignitaries were present physically in the function in Kanpur. 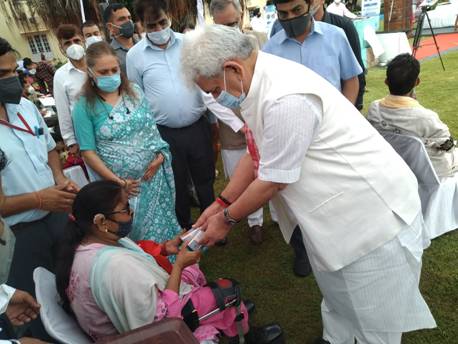 A total of 3610 aids and assistive devices valued at Rs.65.49 Lakhs have been distributed free of cost to 59 Divyangjan and 357 Senior Citizens which are assessed in the month of August 2021 at different 6 locations/ blocks by following the SOP prepared by the Department in view of COVID-19 Pandemic.

Second Distribution camp has been organized in the Union Territory of Jammu & Kashmir in Raj Bhavan in Jammu. The Chief Guest Hon’ble Lt. Governor of Jammu & Kashmir Shri Manoj Sinha distributed aids and assistive devices to ‘Divyangjan’ under the ADIP Scheme of the Ministry of Social Justice and Empowerment, Government of India. It was organized by the Department of Empowerment of Persons with Disabilities (DEPwD) in association with ALIMCO. A total of 1124 aids and assistive devices valued at Rs.46.03 Lakhs have been distributed free of cost to 528 Divyangjan at Block/Panchayat levels by following the SOP prepared by the Department in view of COVID-19 Pandemic.

Two assessment camps for providing assistive devices to Divyangjan and Senior Citizen were also organized in Varanasi (UP) in the virtual presence of Dr. Virendra Kumar, Union Minister for Social Justice and Empowerment, Govt. of India on the occasion of birthday of Hon’ble Prime Minister as ‘Seva Sankalp’ Program.

Speaking on the occasion, Union minister informed about the various scheme and work which are being done by Ministry and also spoke about the future initiatives of the Ministry. Minister said that Divyangjan and Senior Citizens are integral part of Human Resource and ministry is fully committed for their empowerment.

Assessment Camps are being organized by ALIMCO in association with District Administration Varanasi (UP) starting from today till 30.09.2021 and the Union Minister will be physically present on 18.09.2021 in Varanasi to have first hand review the preparations and the process of assessment camp by personal interaction with the beneficiary.

Further, speaking on the occasion of assessment camp conducted in North East Delhi, Union Minister expressed his gratitude towards Member of Parliament of Delhi North East Constituency for initiating the efforts for organizing assessment camps under central sector scheme for Senior Citizens under the ‘Rashtriya Vayoshri Yojana’ and under ADIP scheme for Divyangjan. Union Minister informed that registration of more than 1000 Divyangjan and 270 senior citizens has already been done through CSC e-Governance and he can see virtually that these registered beneficiaries are getting assessed by ALIMCO for various Aids and Assistive devices as per beneficiaries. requirements.