Atmanirbhar India will only be possible if our cities become productive: Shri Hardeep Puri;

Swachh Bharat Mission becomes a Jan-Andolan and will be launching SBM 2.0, with an outlay of Rs. 1.41 lakh crores

Minister of Housing and Urban Affairs and Petroleum and Natural Gas Shri Hardeep Singh Puri said that an Atmanirbhar India will only be possible if our cities become productive. The Minister while addressing the inaugural session of ‘Connect Karo 2021 – Towards Equitable, Sustainable Indian Cities’ event here today said that there can be no doubt that India’s cities—enabled by citizen-centric infrastructure and transformational technology—will be the key to achieving the nation’s development objectives. The five day (from 13-17th September, 2021) event is being organized by the World Resources Institute (WRI) through video conferencing.

Shri Hardeep Singh Puri said that by 2030, almost 70% of the national GDP will come from our cities as rapid urbanisation facilitates efficiencies of agglomerations. The best-performing cities globally contribute five times more to national GDP than comparable Indian cities. We need to generate a similar density of economic activity from our cities to answer the calls of our honourable Prime Minister in becoming a five-trillion-dollar economy. 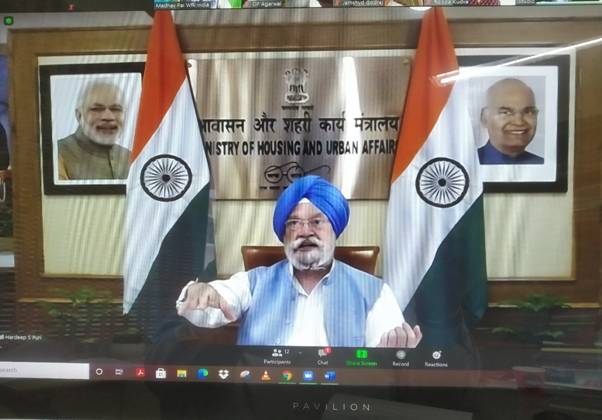 He said that even as cities become the engines of our country’s economy, it is equally important to address the infrastructure deficits that will arise from rapid urbanisation and complex migrant flows. By 2030, the urban population in India will almost double to 630 million. If we are to facilitate this level of growth, we will need to upgrade our urban infrastructure considerably and horrific impact of COVID-19 on our cities has made this even more significant, he said.

Speaking on the adverse impact of growth of urbanization, Minister said that realising the potential of our cities is not just an economic imperative; it is also an environmental reality. Our cities will be the battlegrounds for the fight against climate change. As the recent IPCC report suggests, cities are the major contributors as well as worst affected from climate change and this has led to the Indian Government successfully executing the most comprehensive and planned urbanisation programme anywhere in the world.

The Minister said that there is eight-fold increase the total expenditure on urban development as over the past six years (2015-2021), this figure is about Rs. 11.83 lakh crore against the Rs. 1.57 lakh crores from 2004 to 2014. We have not only successfully operationalised ambitious schemes, but also mainstreamed aspects such as climate change and heritage conservation.

On the Pradhan Mantri Awas Yojana (PMAY), the Minister said that It has seen unprecedented success as nearly 1.13 crore houses have been sanctioned and beneficiaries have already moved in to more than 50 lakh housing units and we are on track to meet the targets set for 2022. An overwhelming majority of the housing has been developed by utilising sustainable and energy-efficient methods, incorporating advanced practices of land-use planning.

On the Atal Mission for Rejuvenation and Urban Transformation (AMRUT Mission) he said that it has addressed requirements of basic social infrastructure. Under AMRUT, 1,831 parks over 3,700 acres have been developed, and 85 lakh street lights have been replaced, resulting in energy savings of 185.33 crore units (kWh).

Mentioning about the Sustainable Development Goals (SDGs) achieved by the Government in implementing these Missions, he said that these Missions focused on achieving economic growth, social justice, and environmental sustainability. We believe that improved urban ecosystems will have quantifiable positive impacts on not just the targets of SDG 11 (Sustainable Cities and Communities) but also on other national priorities such as poverty, health, education, sanitation, energy, and climate action, the Minister added.

Shri Hardeep Puri said that we are also creating a long-term policy framework to move towards sustainable means of living. For instance, through the Climate Smart Cities Assessment Framework, we have harmonised climate change policy, thus enabling our cities to map a way forward to reduce their dependence on non-renewable energy.

He said that here has been a paradigm shift in reframing India’s mobility agenda under the Modi government specially the urban mobility. Under the Urban Transport scheme, public bus transport services will be augmented by deploying public-private partnerships to finance over 20,000 buses. He said that we are supporting Public transport and Non-Motorised Transport (NMT) options across the country. Currently, 721 kms of metro line are operational in 18 cities and a network of 1,058 km of metro network is under construction in 27 cities, thereby reducing the traffic congestion, and the associated air quality and emissions concerns.

The Minister informed that Government will be launching the Jal Jeevan Mission (Urban), with an outlay of Rs. 2.8 lakh crore to ensure universal water supply in all 4,378 urban local bodies in India and enable liquid waste management in 500 cities under the AMRUT scheme.

The Minister said that the Government also be launching the Swachh Bharat Mission 2.0, with an outlay of Rs. 1.41 lakh crores to focus on sludge management, waste water treatment, source segregation of garbage, and reduction in single-use plastics and control of air pollution by waste management in construction and demolition, and bio-remediation dump sites

In the end the Minister said that these initiatives show a coherent vision of the pyramid for urban development, which is constantly informed by the dynamic use of data and technology. In that context, this discussion on ‘Equitable, Sustainable Urbanisation’ is highly relevant and he expressed hope that the deliberations at this 5day event will throw up lots of interesting ideas on urban development.