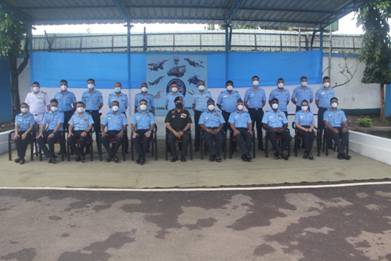 The CINCAN interacted with the air warriors and shared his vision on joint use of assets of the three services. He underscored the importance of Tri-services joint training and emphasised on the need to keep abreast with the emerging technologies to have an edge over the adversaries. He stressed that professional knowledge and hard work are the key to success.

Lt Gen Ajai Singh also visited Air Force Station Porthrapur and 153 Squadron known as the ‘Island Sentinels’. During his interaction with the Indian Air Force personnel, he emphasised on strengthening the Air Defence of Andaman and Nicobar Islands whichhas gained strategic importance due to the changing geo-political situation in the Indian Ocean Region. He also awarded on-the-spot commendations to some air warriors for their extraordinary dedication and devotion to duty.

The CINCAN also visited the newly-built residential area for the Air Force personnel at Vayu Vihar, Brookshabad where he was briefed on the various welfare facilities developed at the residential area. He appreciated the efforts put in by the Air Force Component in effective air surveillance despite various challenges in the remote islands.