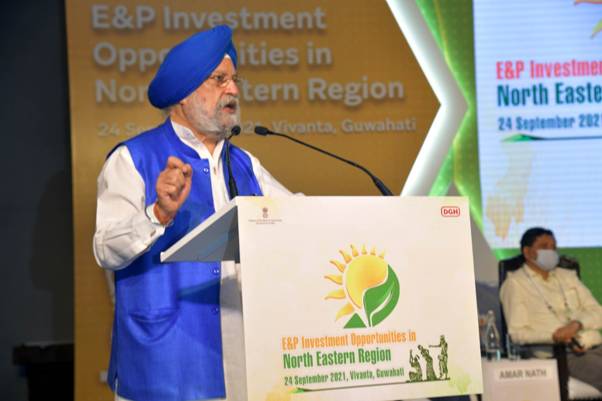 Speaking on the occasion, Shri Puri said that NER, with its abundant natural resources, rich cultural heritage and huge opportunities for growth is central to our country’s development agenda. The North-Eastern States of India are perceived to be highly prospective based on available geo-scientific information and hence ample opportunities for potential oil and gas finds through accelerated exploration exists in the region.

Shri Puri said that the NER is of strategic importance for India. In line with its intent of rapidly transforming the region, the Government of India has undertaken many key initiatives to augment Infrastructure and pace economic development.  He mentioned about following key Oil and Gas initiatives in the NER: Shri Puri announced that Digboi refinery in Assam will be expanded. He also assured that the issue of blending ethanol with petrol at the refinery level will also be explored.

Shri Puri said that the outlook of E&P business in North East Region is indeed promising. There is a huge hydrocarbon potential waiting to be tapped; of the estimated 7600 MMTOE in the North-East, only 2000 MMTOE has been discovered so far. With concerted efforts by industry and governments, oil production is expected to increase by 67% from 4.11 MMT in 2020-21 to 6.85 MMT in next 4 years. Gas production is forecasted to more than double from 5.05 BCM in 2020-21 to 10.87 BCM in next 4 years. Calling upon the investors to actively participate in upcoming rounds and become part of the national E&P enterprise which is set to gather momentum in the days ahead, Union Minister said that much impetus has been given to north-east region in recent past, which will act as catalyst for the envisaged future growth in the region. Shri Puri appreciated the launch of the portal by Government of Assam today for facilitation of statutory clearances and approvals for E&P operators and hoped that other State Governments will also launch similar initiatives. In this context, he announced that there will be periodic meeting through VC with NE states to sort out the issues.

Speaking on the occasion, Assam Chief Minister, Dr. Himanta Biswa Sarma extended full support of the State Government in the exploration activities. He assured that the State Government is taking steps for providing early environmental clearances for the Oil and Gas projects. He said that the contribution of Assam in the Oil and Gas sector is well-known and he wants the exploration activities to increase fast. 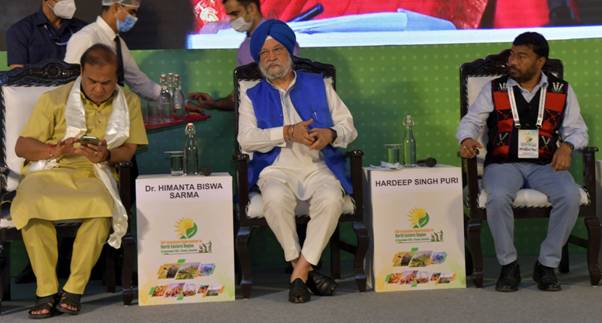 Shri Rameswar Teli said that India is going to become a top energy consumer in the coming times. For ensuring the energy security it is important that Oil and Gas sector should develop fast and import dependence should come down. He said that NER has large potential and the same should be explored in active participation with the State Governments. 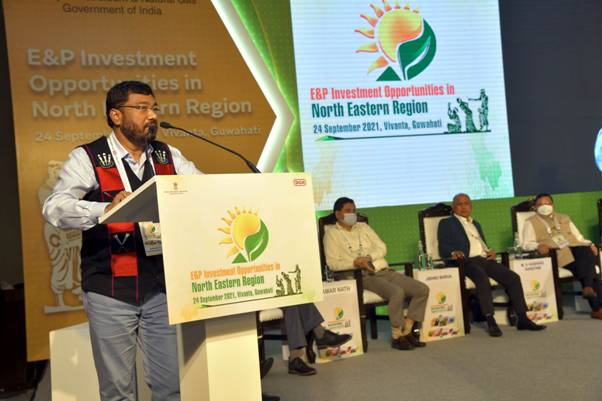 The objective of the conference was to highlight the portfolio of high-volume Oil and Gas assets of Indian Sedimentary basins, and to promote the Bidding Rounds of Hydrocarbon Exploration and Licensing policy and Discovered Small Field Policy. The event saw enthusiastic participation from Central and State Government, leaders of National oil companies, private E&P companies, Service Providers and Academic Institutions.

Theme of event was aligned to Hydrocarbon Vision 2030 for north-east India, which is a paradigm shift in production and utilization of hydrocarbons to catalyze growth in the North East region and to improving standard of living for the people, generating opportunities for the youth and creating a sustainable energy secure future.

This was one of biggest E&P sector event of recent time in the region which was exhaustively planned with a comprehensive set of presentations and panel discussions touching a gamut of topics pertaining to E&P sector.

E&P opportunities showcased at the event: