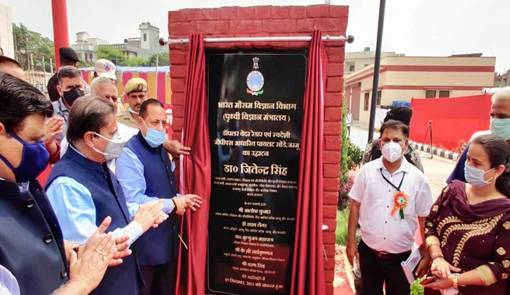 The Minister appealed to media persons to kindly spare a few moments to cover these monuments also so that the information could reach the stakeholders who include students, Start-Ups, self – livelihood seekers, farmers, travellers and the common citizen who would find Ease of Living from these hi-tech facilities. He reminded that even the media is a stakeholder because the media telecast today heavily depended on modern tools of technology like Satellite communication. There are also huge career prospects and employment avenues for youth in Space Technology, Aroma farming, Atomic Energy, Meteorology etc. which they can avail only if they are informed about these developments through different mediums, he added.

Dr. Jitendra Singh said, the X-Band Doppler Weather Radar installed today will help in providing real-time monitoring and reporting of weather events affecting Jammu region and will be helpful in providing weather forecasts in different sectors including agriculture and tourism forecast especially for the pilgrims of Mata Vaishno Devi. 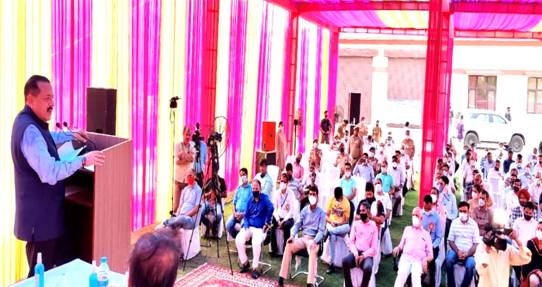 Besides providing real-time monitoring, the X-Band Doppler Weather Radar stationed at Jammu will provide improved weather services to the people of J&K and an input to numerical weather prediction models for generating better weather forecasts, the Minister added.

Referring to Prime Minister’s revolutionary decision to “unlock” India’s Space Technology and other sectors to private players for the first time after independence, Dr Jitendra Singh said that this will not only bring ‘ease of living’ for people and ‘ease of environment’ for private players but will boost the scientific innovative environment in the country. The Minister further said, while India began its Space journey much late, but today the country has been in a position to provide inputs from Mangalyaan and Chandrayaan to the premier space institutions of the world like the NASA of USA.

Acknowledging contribution of Prime Minister Narendra Modi for these giant scientific leaps from the last 7 years, Dr. Jitendra Singh said that the PM gives highest priority to scientific developments by providing highest budgetary allocations to the Ministry and Departments of Science and has removed the taboos which have been the impediments to the development of science and technology in the country.

Dr Jitendra Singh said, Prime Minister Narendra Modi has accorded highest priority to clean and green energy and accordingly announced Hydrogen Mission a fortnight ago during the 75th Independence Day Speech from the ramparts of the Red Fort.

Referring to the making of first DNA based Covid19 vaccine in the country, Dr. Jitendra Singh said that India granted use authorization to the world’s first and India’s indigenously developed DNA-based vaccine for COVID-19 which is a great milestone achieved by the Translational Health Science and Technology Institute (THSTI), Faridabad. Dr Jitendra Singh further said that India today is the “Cue Master” in science to the rest of the world as the quality of our scientific human resource is far more superior and many scientific advanced nations are taking cues from India as being advanced in many areas of science today.

Praising Prime Minister Narendra Modi for encouraging application of science in developmental activities, Dr. Jitendra Singh said that it is the result of this that science today has virtually entered every sector and every household in India in one form or the other be that the digital technology, information technology in the form of e-offices, online education etc. which is an indication now that hereafter the entire growth will be science based, technology based.