Inauguration of Distribution camps for providing 8291 Aids and Assistive devices among 4146 Divyangjan in Chhindwara (M.P) under the ADIP scheme of Government of India


A ‘Samajik Adhikarita Shivir’ for distribution of aids and assistive devices to ‘Divyangjan’ under the ADIP Scheme of the Ministry of Social Justice and Empowerment, Government of India was organized by the Department of Empowerment of Persons with Disabilities (DEPwD) in association with ALIMCO and District Administration Chhindwara (M.P) at FDDI, Imlikheda in Chhindwara district of Madhya Pradesh. A total of 8291 aids and assistive devices valued at Rs.4.32 crore will be distributed free of cost to 4146 Divyangjan at Block/Panchayat levels by following the SOP prepared by the Department in view of  COVID-19 Pandemic.

Speaking on the occasion Shri Shivraj Singh Chauhan, Chief Minister, Madhya Pradesh said that the society which does not care about Divyangjan is itself a disabled society. He said that under the leadership of Prime Minister, central government has implemented various welfare schemes in the interest of Divyangjan of the country. The Chief Minister expressed his gratitude towards Dr. Virendra Kumar on behalf of people of Chhindwara, as it was his first official program as Union Minister in the state of Madhya Pradesh. He applauded the efforts of central government to empowerment of Divyangjan. Explaining about various scheme run by Government of Madhya Pradesh for welfare of Divyangjan, the Chief Minister informed that his government has taken initiatives for Transgender community and brings them in the mainstream of society.

Union minister for Social Justice and Empowerment Dr. Virendra Kumar said that Divyangjan are the integral part of Human resource. He said that, ministry is working on the vision of ‘Sabka Saath Sabka Vikas’ of Prime Minister, and has implemented various welfare schemes for developing an inclusive society and empowerment of persons with disabilities. Informing about the work done in last seven years by Ministry, Union Minister said that new Act i.e Right to Person with Disability Act 2016 implemented by government to provide greater rights and entitlements to PwDs by envisioning an inclusive and enabling environment. Union Minister emphasised on Skill training programmes for empowerment of Divyangjan to bring them in the mainstream of society for overall development of the country. The Minister added that 4455 Divyangjan have been imparted Skill Training in the State of Madhya Pradesh for the value of Rs.3.74 crore. Informing about various initiatives taken for Divyangjan, the Union Minister informed that 709 Railway stations, 10,175 Bus Stations and 683 websites have been covered under Sugamya Bharat Abhiyan. Looking at the interest towards the sports among the Divyangjan of the country and their good performance in Paralympics, the ministry has decided to establish ‘Divyangta Khel Kendra’ in different parts of the country. Gwalior City has been identified for the opening of one such facility. National Mental Health Rehabilitation Center will be opened in Sehore, Madhya Pradesh. The work on both the projects has been started by the CPWD.

Addressing on the occasion, Union Minister of State for Social Justice and Empowerment Sushri Pratima Bhumik said that she is very pleased that the beneficiaries who were identified in the year 2020 but due to COVID 19 pandemic could not received their aids and assistive devices will now be able to get their due which will help them to lead a dignified life. She said that our department is committed towards the Divyangjan and will fulfil the vision of Hon’ble Prime Minister towards empowerment of persons with disabilities under the guidance of Union Minster for Social Justice and Empowerment. She also extended her gratitude towards the Chief Minister of Madhya Pradesh for his support in achieving the goal of the department. 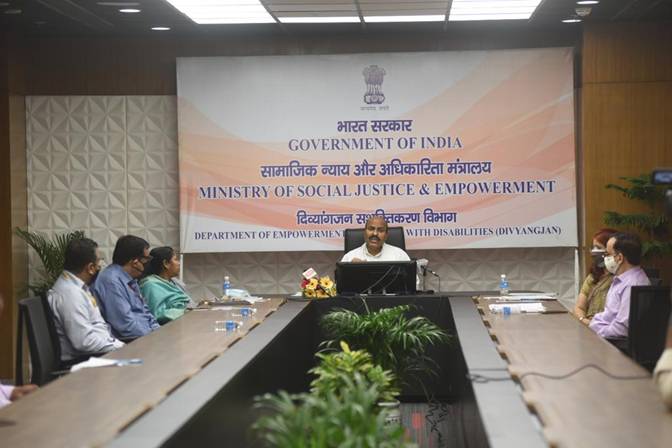 Smt. Anjali Bhawra, Secretary, DEPwD, Ministry of Social Justice & Empowerment, Govt. of India informed about the details of the schemes being implemented by the department for Divyangjan. She said that government has taken several steps for providing employment to Divyangjan and Skill Training program are being conducted to empower persons with disabilities to open avenues for their self employment and opportunity in public & private sector.

In view of COVID 19, out of total 4146 pre-identified Divyang beneficiaries, Aids and Assistive Devices will be provided to as much as approx 50 beneficiaries of Chhindwara city block in the inaugural distribution camp at the main venue of the function in the presence of dignitaries. Remaining identified beneficiaries will be provided their prescribed assistive devices subsequently at their nearest respective Blocks in a series of follow-up distribution camps in Chhindwara District.

The high end products, which are to be distributed in the camp, include 180 Battery operated Motorised Tricycles. These tricycles shall be provided to the eligible orthopedically impaired Divyangjan under ADIP scheme. The cost of one motorised tricycle is Rs.37000/- each out of which Rs.25,000/- is covered under the subsidy provided under ADIP scheme and the remaining amount is either provided by beneficiaries or may be sponsored/contributed from other sources like MP/MLA LAD fund etc.

The camps are conducted under the Scheme of Assistance to Disabled Persons (ADIP) for Purchase/Fitting of Aid/Appliances. ADIP is one of the most popular schemes for providing assistive aids & appliance to Divyangjan and is organized by Artificial Limbs Manufacturing Corporation of India (ALIMCO), a Public Sector Undertaking under the Ministry of Social Justice and Empowerment which has been identified as the implementing agency of the ADIP scheme in association with states/districts authorities.

In view of COVID19 Pandemic, a Standard Operating Procedure (SOP) was approved by Government of India for ensuring assessment and distribution of aids and assistive devices while observing social distancing and sanitization protocols.