Industrial Safety in Petroleum and Explosives Sector gets a Big Boost

Transportation of life-saving Liquid Oxygen besides other compressed gases such as Argon, Nitrogen, LNG etc allowed through ISO Containers

In the aftermath of COVID 19 pandemic, Government of India has taken number of steps to ensure ‘Aatmanirbhar Bharat’. Department for Promotion of Industry and Internal Trade (DPIIT), Ministry of Commerce and Industry recently implemented reforms to ensure Industrial Safety in critical premises (such as petroleum installations, explosive manufacturing facilities, cylinder filling and storage premises, etc) thus enhancing public safety as well as reducing cost of doing business and creating an enabling ecosystem for domestic as well as international investors. In this context, the department has worked with the Petroleum and Explosives Safety Organization (PESO), an autonomous body under DPIIT that is charged with designing and implementing policies and standard operating procedures for the manufacturing, storage, transport and use of explosives, petroleum as well as hazardous chemicals, said Ms. SumitaDawra, Additional Secretary, DPIIT while addressing a press briefing here today. 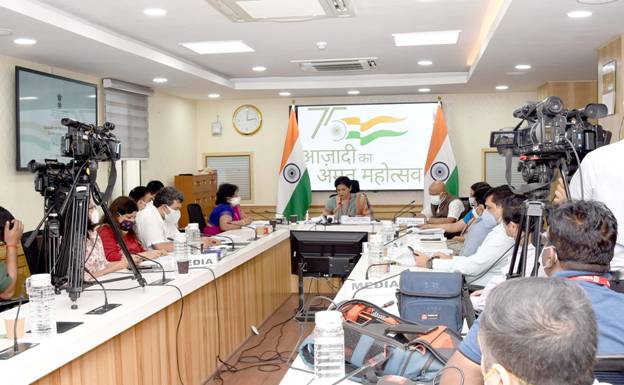 In this context, the Rules pertaining to five major areas namely, Static & Mobile Pressure Vessels (Unfired) [SMPV(U)], Calcium Carbide, Ammonium Nitrate, Gas Cylinders, Petroleum and Explosives were examined, and discussed in detail with relevant stakeholders and representatives including private sector, industry bodies and other ministries. After intensive stakeholder consultations and feedback over the course of several months, starting January 2021, amendments in prominent regulations were proposed. These amendments were then finalised and final amendments in three cases (i) SMPV, (ii) Calcium Carbide &(iii) Ammonium Nitrate have been notified on 31stAugust 2021. Further, draft amendments in Gas Cylinder Rules were notified on 25th June 2021.

Further, the Department is now working on amendments in Explosives Rules in consultation with stakeholders.

The highlights of the specific reforms done under each of the three main amendments have been listed below.

(i) The amendment has been done to introduce the concept of Third-Party Inspecting Agency (TPIA) to carry out the work related to certification, testing, inspection and safety audit of the licensed premises.

(iv)  Provisions have now been incorporated in the Rules to allow transportation of cryogenic compressed gases such as Oxygen, Argon, Nitrogen, LNG etc through ISO Containers in domestic areas. This will help to transport Liquid Oxygen from surplus areas to deficit areas and promote multimodal transportation (by road, rail and waterways) of these gases and reduce the transportation cost as well as time.

(v) To ensure expeditious disposal of applications, the timelines to obtain No Objection Certificate from District Authority has now been specified to two months. In case of failure to dispose the application for NOC in the given time, NOC will be considered deemed to be issued.

(vi) The need for submitting application and fees to obtain duplicate license has been eliminated. System generated online copy will be sufficient.

(i) To reduce compliance burden, PESO has increased the validity of license for storage of Calcium Carbide from 3 years to 10 years.

(ii) The need for submitting application and fees to obtain duplicate license has been eliminated. System generated online copy will be sufficient.

(iii) Provision for online fees payment facility has been provided in the Rules.

(iv) To monitor premises for storage of Calcium Carbide, provision of geo-mapping of the premises has been incorporated in the Rules and will be made available to the concerned state and central authorities.

(vii) The need for submitting application and fees to obtain duplicate license has been eliminated. System generated online copy will be sufficient.