Eastern Naval Command (ENC):           The 36th International Coastal Cleanup Day was celebrated consecutively for the tenth year by Eastern Naval Command (ENC) on 18 Sep 21. On the occasion, ENC undertook Coastal Cleanup Drive at Yarada Beach, Bheemili Beach and other sea fronts within premises of naval units at Visakhapatnam. Approximately 500 Naval personnel, Defence Civilians and their families carried out the cleanup drive following the prevailing COVID19 protocols. The cleanup drive was aimed at creating awareness among people to keep our beaches clean, safeguarding the environment and inculcating the habit of respecting coastlines which in turn nurtures the marine biodiversity.

The International Coastal Cleanup began more than 30 years ago when communities rallied together with the common goal of collecting and documenting the trash littering their coastline. Every year, on the third Saturday in September, the International Coastal Cleanup Community encourages people around the world to remove trash and debris from beaches, waterways and other water bodies, to identify the sources of the litter, to change behaviours that cause pollution and to raise awareness on the extent of the marine debris problem.

Southern Naval Command (SNC):        The Southern Naval Command observed International Coastal Clean-up Day on 18 Sep 21 with focus on mangrove plantation and clearance of plastic/non-biodegradable waste along waterfront areas in and around Kochi. Pursuant to the global campaign of keeping coastlines clean, more than 600 Naval personnel and the families of Southern Naval Command undertook clearance of plastic and non-biodegradable waste at different locations spread across the city, coastal areas such as Fort Kochi beach, Thevara waterfront, Willingdon Island, Cherai beach, Bolgatty and around 2 km stretch of the Venduruthy channel while restoring around 1 lakh sqm of mangroves to the pristine condition. In addition, 80 mangrove saplings were also planted along the Venduruthy channel. Similar coastal cleanup drives and lectures/webinars/competitions emphasising protection of coastal and marine environment were undertaken with enthusiastic participation of the Naval community at other outstation Naval units located at Lonavala, Jamnagar, Chilka, Coimbatore, Goa, Ezhimala and Mumbai.

Being the training Command of the Indian Navy, the Southern Naval Command has always been at the vanguard in promoting environmental conservation activities both at the Command Headquarters, Kochi as well as at Naval stations spread across the country. Mandated to oversee naval training, the Southern Naval Command has conceptualised and implemented a variety of green initiatives. Keeping environmental preservation as one of the Key Result Areas, the Command has constantly endeavoured to motivate young officer and sailor trainees of the Indian Navy to imbibe the habit of protecting mother nature as part of their grooming efforts in preparing them to become responsible future Naval leaders and dependable citizens of India. Particular attention has also been given to create more awareness among the families and more importantly the children.

During the last three years, the Command has adopted multi-dimensional approach towards conservation of the environment and implementation of energy conservation methods. To highlight a few, the personnel of the Command were actively involved in rejuvenation of 4.5 km long Venduruthy Channel near Kochi Naval base, creating awareness in and around Naval establishments. Efforts were undertaken to enhance green cover by conducting mass plantation drives which included planting more than 75,000 trees, using fast growing Miyawaki forestation method. In addition, regular coastal clean-up drives, mangrove plantation drive, in-house handling and recycling of bio and non-biodegradable waste, adopting efficient energy and water saving methods etc were also undertaken.

The Command has also earnestly endeavoured to continue all the efforts for protecting and conserving environment and natural resources. Towards achieving the same, the Command has implemented a Green Initiative and Environment Conservation Roadmap with prime focus on Carbon footprint reduction. With the personal involvement of Vice Admiral Anil Kumar Chawla, Flag Officer Commanding-in-Chief, Southern Naval Command is committed to create a clean, green and healthy environment in line with the visionary environment conservation policies of the Govt of India. On the occasion Adv M Anilkumar, Mayor, Kochi Municipal Corporation and staff also participated whole heartedly for the conduct of event in Kochi.

Kolkata:        INS Netaji Subhas and allied units at Station Kolkata observed International Coastal Cleanup Day on 18 Sep 21. According to the global campaign to keep our Coastline clean, this year’s efforts were themed on ‘ Keep trash in the bin and not in the Ocean’

To mark the occasion, a Shramdaan and Cleanup Drive was conducted along the banks of the River Hooghly at Kolkata. Naval Personnel actively took part and cleared plastic,  unwanted refuse, litter, debris and non-biodegradable waste along a 50m stretch of the riverbank, for subsequent environmentally friendly disposal.

Chennai:       On the occasion of International Coastal Cleanup Day on 18 Sep 21,BeachCleanup Drive was conducted by INS Adyar at the Beach front on Saturday morning. Naval personnel from various ships and establishments in Chennai Station along with and HQTNP Staff participated in the coastal cleanup drive and removed the plastic and other garbage strewn across the beach.The event was conducted with adherence to social distancing norms and Covid Protocols. 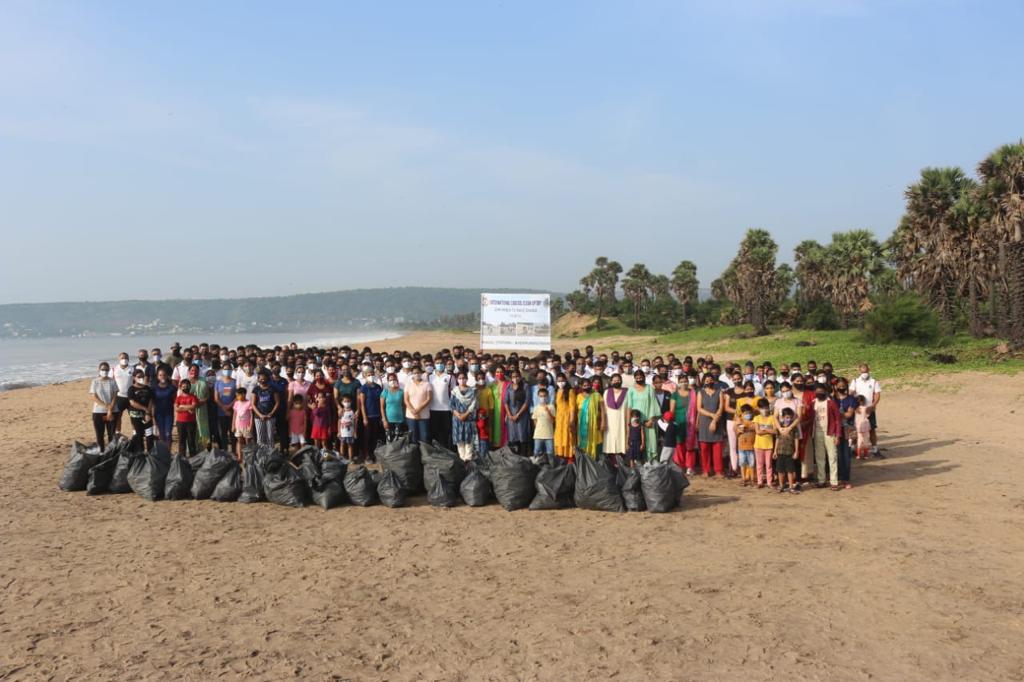