Outcome of Action Plan will significantly depend on efficacy of enforcement and implementation by the States: Shri Bhupender Yadav

A meeting chaired by Union Minister for Environment, Forest and Climate Change, Shri Bhupender Yadav was held at Indira Paryawaran Bhawan in New Delhi today, with Chief Minister of Haryana, Shri Manohar Lal Khattar, Environment Ministers of Delhi, Uttar Pradesh, Rajasthan and senior officials from Punjab and Ministries of Agriculture, Power, Animal Husbandry and all other stakeholders  for improvement of air quality in Delhi-NCR which tend to aggravate during the winter season. The Chairman of Air Quality commission was also present.

The meeting was called to assess the preparedness and readiness of State administration for implementation of measures to prevent and control of air pollution in NCR which is also linked to Stubble burning in ensuing harvesting season. 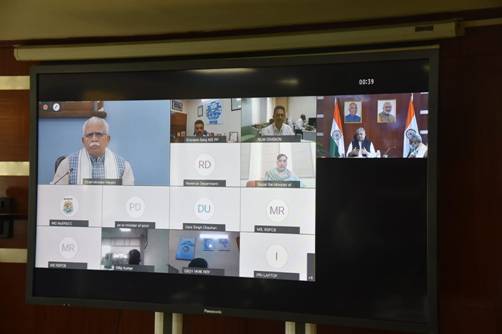 Speaking during the meeting Shri Yadav said that it is heartening to note that the spirit with which the Commission for Air Quality was conceived is reflected in the intensive and serious efforts undertaken by the Commission on Air Quality Management in sensitizing the States in implementation of their Action Plans and expressed hope that with the collaborative efforts of all stakeholders, local administration, regulatory bodies and enforcement agencies coupled with aggressive awareness campaign, there will be significant improvement in Air Quality in Delhi-NCR region. Stressing that the outcome of the Action Plan will significantly depend on the efficacy of the enforcement and implementation by the States, Shri Yadav also highlighted that issues requiring any inter-State and Inter-ministerial co-ordination will be adequately addressed by the Commission.

Management of Agriculture Stubble Burning (Parali) was discussed at length during the meeting. Burning of Parali during the period Sep – Oct has been attributed to poor air quality of the regions, which get aggravated due to local meteorological conditions in NCT. This has been observed in last few years.

It was informed that in the last one month Union Environment Minister with Ministers of major Ministries, have examined the various alternatives and existing policies and have tried to facilitate and strengthen the existing in-situ and ex-situ measures for control of stubble burning.

Measures, which are at various stages of its implementation, but will help in providing an enabling environment towards abatement of Air Pollution in Delhi NCR include in-situ management of stubble by bio-decomposition in large scale by the State of UP, Haryana, Delhi and Punjab, mandatory use of bio-mass with 50% paddy straw as a supplement fuel in Thermal Power Plants in NCR, setting up of a Task force which has been constituted to work out the mode and means for utilizing the non-basmati stubble as fodder in States of Rajasthan and Gujarat, common manure development facility using rice straw and private participation to encourage in-situ management of Parali (Bio-decomposition).

Various measures taken by the States were also informed during the meeting such as Rs 200 Crores has been allocated by the Government of Haryana to provide incentive to farmers for containing burning of Parali. It was mentioned that UP is resorting to bio-decomposition of Parali in 10 Lakh acres with an innovative exchange programme allowing exchange of Parali with cow dung based manure. Efforts have been made by Haryana Government for bio-decomposition in 1 Lakh acres; by Punjab in 5 Lakh acres and in 4000 acres by Delhi Government.

Air pollution in NCR is a cause of concern and the sources are diversified. Major sources which contribute to the poor air quality in the region can be attributed to emission arising from seasonal burning of Parali and other continuous emission sources such as vehicular, Thermal Power Plants and other industrial emissions.

Realizing the requirement to address the constraints and limitation for coherent and participatory approach to deal with the issues and to have Air-shed based approach, Government of India instituted “The Commission for Air Quality Improvement in NCR &AA” through promulgation of an ordinance in 2020, which was subsequently passed as an Act by Parliament in August 2021.

The Commission which has members from all States and important Stakeholders has made many efforts and interactions with the stakeholders. As on date, more than 8 advisories and 42 directions have been issued to deal with the challenges and also to enable the concern authorities to take appropriate action for improvement of air quality in the region. The Commission has also issued directions specifying that 5-10% of biomass fuels are to be mandatorily utilized by the Thermal Power Plants in NCR region which would allow the use of Parali besides enhancing the income of farmers.