A team of scientists have, for the first time, developed a large-scale reactor which produces a substantial amount of hydrogen using sustainable sources like sunlight and water, which is a cost-effective and sustainable process.

India has set a target of 450 GW of renewable energy by 2030. To achieve this feat, in the current scenario, researchers all over the world are working towards renewable energy solutions which should be sustainable with a limited carbon footprint. One of the most economical ways to achieve this is to produce hydrogen at a large scale through photocatalytic water splitting. It is the long-term persistent solution for the growing renewable energy needs and a low-cost economic process which will benefit society in the longer term. Thus significant efforts from scientists towards achieving this goal are utmost necessary and urgent need-of-the-hour.

In this direction, Dr. Kamalakannan Kailasam and his team, including Prof. Ashok K Ganguli, Dr.Vivek Bagchi, Dr.Sanyasinaidu Boddu, Dr. Prakash P N & Dr. Menaka Jha from the Institute of Nano Science and Technology (INST), Mohali, an autonomous institute of the Department of Science & Technology (DST), Govt. of India have developed a prototype reactor which operates under natural sunlight to produce hydrogen at a larger scale (around 6.1 L in 8 hours). They have used an earth-abundant chemical called carbon nitrides as a catalyst for the purpose.

The process had been attempted many times by many researchers using complex metal oxide/nitride/sulphide based heterogeneous systems but was very difficult to reproduce in large quantities. The INST team employed the low-cost organic semiconductor in carbon nitrides which can be prepared using cheaper precursors like urea and melamine at ease in a kilogram scale. When the sunlight falls on this semiconductor, electrons, and holes are generated. The electrons reduced the protons to produce hydrogen, and holes are consumed by some chemical agents called sacrificial agents. If the holes are not consumed, then they will recombine with the electrons. This work is supported by the DST Nano Mission NATDP project, and the related article has been published in the ‘Journal of Cleaner Production’ recently, and the team is in the process of obtaining a patent for the technology.

The INST team has been working in this area of photocatalytic water splitting to generate hydrogen for quite some time now. “The energy crisis and ever-threatening climate crisis urged us to work on this promising way of hydrogen production through photocatalytic water splitting. The stability and chemical flexibility of having different organic groups in carbon nitrides triggered us to work on these cost-effective organic semiconductor materials for sustainable hydrogen production,” added Dr. Kamalakannan.

The INST team started from the lab-scale process to the bulk scale of developing the photocatalyst and hydrogen production through a large prototype reactor. The reactor is about 1 metre square, and the photocatalyst was coated in the form of panels where water flow is maintained. Upon natural sunlight irradiation, hydrogen production occurs and is quantified through gas chromatography. The team is in the process of optimising the hydrogen production with effective sunlight hours in addition to the purity of the hydrogen, moisture traps, and gas separation membranes so as to hyphenate with the fuel cells.

Hydrogen generated in this manner can be used in many forms like electricity generation through fuel cells in remote tribal areas, hydrogen stoves, and powering small gadgets, to mention a few. Eventually, they can power the transformers and e-vehicles, which are long-term research goals under progress.

Patents: Development of large-scale prototype reactor with photocatalysts (suspended powders) and successful use of them in large-scale hydrogen production – Under process. 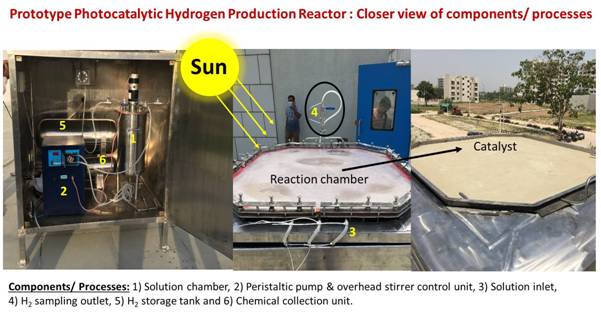 Why Does Your eCommerce Website Fail in Conversion? Top Ways to Get Success 
12 hours ago

Popular Posts
Load More
Business
Why Does Your eCommerce Website Fail in Conversion? Top Ways to Get Success 
12 hours ago