Shri Rameswar Teli and Shri D.P.S. Negi, Chief Labour Commissioner (Central) interacted with the unorganised workers and Union leaders of BMS Trade Union and also had media interactions here today to sensitize them about the features and benefits of the recently launched e-SHRAM portal for creating a national database of unorganized sector workers. Ministry of Labour & Employment, in technical collaboration with NIC, has developed an e-SHRAM portal for online registration of Unorganized workers for creation of a comprehensive National Database of Unorganized Workers (NDUW) seeded with Aadhaar. This game changer initiative was launched and handed over to the States/UTs by the Union Minister of Labour & Employment and Environment, Forest & Climate Change, Shri Bhupender Yadav on 26th August, 2021. This centralized database of unorganized workers will be prepared in cooperation with the State Governments.

15 camps of CSC were continuously operating to ensure continuous and seamless registration of participating unorganised workers on E-shram portal. During the program, Honourable Minister distributed E-shram card, Covid-19 relief scheme certificates, Atal Bimit Vyakti Kalyan Yojna certificates and Beedi Shramik cards to the beneficiaries. Information related to the portal such as free registration(Registration cost to be borne by GOI), provision of Toll Free number 14434 with facilitation in 9 languages and so on. Honourable minister while explaining the simple and speedy process of registration also highlighted that within 26 days of the launch of the E-Shram portal around 1 crore beneficiaries have already been registered. Videos were streamed to make the participating beneficiaries and workers understand the process of registering on E-shram portal. 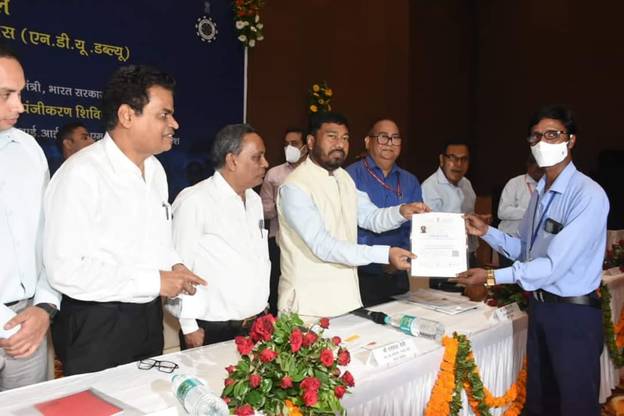 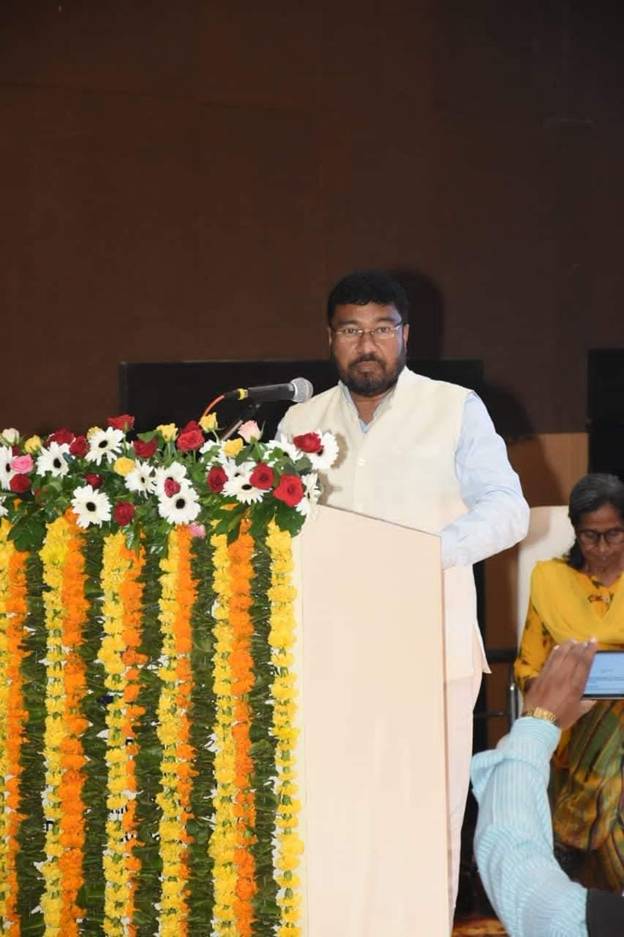 Shri Teli highlighted that the centralized nature of the database will ensure the access of the benefits across the country by building in the portability of social security and welfare benefits required for the workers like the construction workers and migrant workers. In addition to this, there is also a provision of Rs 2.0 Lakh Accidental Insurance cover for every registered unorganized worker on e-SHRAM Portal.  If a worker is registered on the e-SHRAM portal and meets with an accident, he will be eligible for Rs 2.0 Lakh on death or permanent disability and Rs 1.0 lakh on partial disability.

While interacting with media persons and Trade Unions, he also underscored the role of State Governments in creating this database of unorganized workers. “The States/UTs will own their data and the State/ UT Governments will primarily mobilise and register the unorganised sector workers of their respective State/UTs on the e-SHRAM Portal and this data can be utilised by the State/UT Governments for delivery of various social security schemes to unorganised workers as per eligibility”, he stated.

Highlighting the various benefits to workers from registering on e-SHRAM portal, Shri Teli said that given the huge presence of unorganised workers ( Direct & Indirect) in the Ordnance Factories, Refineries, Petrol companies & Nationalised Banks all out efforts should be made by Respective Managements to facilitate their registration on the portal at the earliest so that they can derive the benefits. He also informed that many such outreach efforts are being planned across the country to sensitise the various stakeholders about the need and the benefits of registering on e-SHRAM Portal.