The Preamble to the Constitution of India recognises ‘Justice’ as the first deliverable to be secured for its citizens. The hallmark of a successful and vibrant democracy is that every citizen is not only guaranteed justice, but also that such justice is equitable. This obligates the State to create an environment where justice-delivery is looked upon not as a sovereign function but as a citizen-centric service.  The global pandemic has made the role of Legal Aid Institutions more pronounced in mitigating the sufferings of people. With this perspective in mind, the Department of Justice and NALSA has undertaken a special pan-India campaign on 17th September 2021 to mainstream legal aid and to actualize the aspiration of access to justice for every citizen.

As the nation celebrates “Azadi ka Amrit Mahotsav”, Department of Justice launched the “Ek Pahal /एक पहल” drive across the country from 17th September till 2nd October to encourage mass registration under Tele-Law.  The medium of Tele Law effectively provides pre-litigation advice / consultation to beneficiaries by Panel Lawyers through a huge network covering 51,434 Common Service Centres in 50,000 Gram Panchayats in 633 districts across 34 States and UTs.

With registration login of 5480 beneficiaries this login drive registered 138% increase over daily average registration of beneficiaries. More than 25000 banners in regional languages were displayed at CSCs as कानूनी सलाह सहायक केंद्र | NALSA and State Legal Services Authorities have been relentlessly working to create a robust framework of legal aid delivery and legal empowerment of the citizens by providing proximate, affordable and speedy justice to all citizens especially the needy and indigent.  A Pan-India Special Campaign for creating Legal Awareness was launched by NALSA through its country-wide organisational framework on 17th September 2021.  The highlights of this campaign include deployment of 185 Mobile Vans and other vehicles to show-case films and documentaries on Access to Justice programme, holding of 4100 Legal Aid Clinics to give pre-litigation / legal advice to common citizens with the help of 37,000 Panel Lawyers and Para-Legal Volunteers besides holding awareness programmes at the village level on legal aid in 672 districts.

Bringing Justice closer to the needy people.
This is the launch of Legal Awareness at Chattishgarh by Hon’ble Acting Chief justice. pic.twitter.com/M5EHrmvRbz 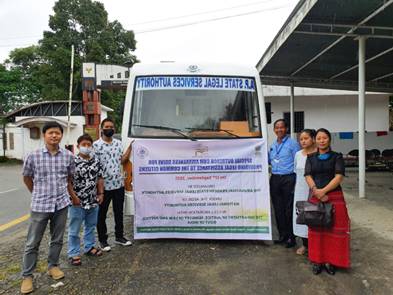 This combined effort of the Department of Justice and NALSA has been a path-breaking step in the process of furthering inclusive governance; in championing the cause of giving voice to the voiceless; and serving the goal of ‘Sabka Saath, Sabka Vikas and Sabka Nyaya’.

5 Best-Proven Ways to Convert Image to Text?
2 days ago