Life of awardees are models to others on how to overcome challenges and be self-reliant, says Shri Nagendra Nath Sinha, Secretary, MoRD

As part of Azaadi ka Amrit Mahotsav and on the occasion of Antyodaya Diwas that marks the birth anniversary of Pandit Deen Dayal Upadhyaya on 25th September 2021, the National Institute of Rural Development and Panchayati Raj (NIRD&PR), Hyderabad under the auspices of the Ministry of Rural Development presented Hunarbaaz Awards to 75 diyangjan candidates from 15 states. The virtual award ceremony was organised by NIRDPR with MoRD, in association with State Rural Livelihood Missions (SRLMs) and Rural Self-employment Training Institutes. CEOs of SRLMs and Directors of RSETIs handed over the awards at the respective states to the specially-abled achievers. DDU-GKY and RSETI ka Hunarbaaz Awards have been instituted by the National Institute of Rural Development and Panchayati Raj (NIRD&PR), Hyderabad under the auspices of the Ministry of Rural Development for 75 differently-abled candidates as part of Azadi ka Amrit Mahotsav. The awards are given to the candidates who were trained through Deen Dayal Upadhyaya Grameen Kaushalya Yojana (DDU-GKY) and Rural Self Employment Training Institutes (RSETI) schemes of the Ministry in various trades, they subsequently got placed and worked in the organizations for more than one year or were successfully settled in the trade of their choice as self-employed. 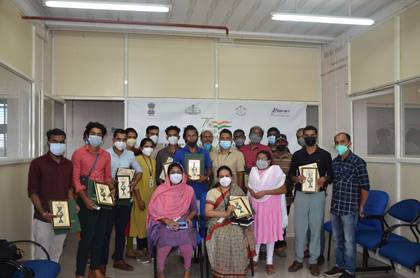 Candidates after receiving the Hunarbaaz awards in Kerala 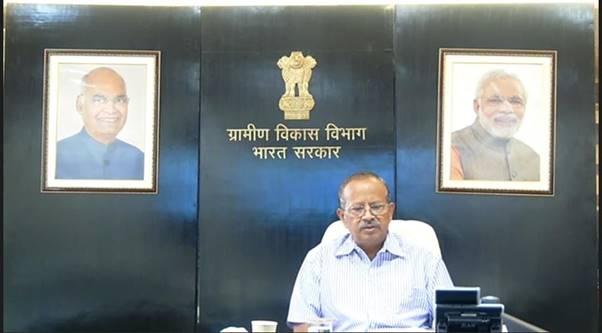 Paying tributes to Pandit Deen Dayal Upadhyaya Shri Nagendra Nath Sinha said that his philosophy of Integral Humanism and Antyoday, the “rise of the last person” is deeply connected with this event. Given the right opportunity for divyangjan, they can fly higher and that is what our divyangjan sportspersons demonstrated to India and the world in the Paralympics of 2021. Shri Sinha addressing the Hunarbaaz awardees mentioned that in the same vein, their life is a model to others on how to overcome challenges and be self-reliant. A round table is desired to be conducted with employers who are currently employing DDU-GKY trained candidates and who proactively drive inclusion in their workforce, as well as those national and multi-national organisations that are working towards the diversity and inclusion agenda. This will further expand the scope and choices for divyangjan youth of rural India to get appropriate skilling, placement and patronage of such organisations through DDU-GKY and RSETI, Shri Sinha added.

Delivering the keynote on the occasion, Dr G Narendra Kumar, Director General, NIRDPR pointed out that about 69% of the differently-abled persons are in rural India according to the 2011 census. Studies prove that the productivity of differently-abled workers is 15 percent higher than others. Also, attrition rate of differently-abled workforce is much lower than others; and this is certainly an attractive proposition for employers. The Director General also highlighted the need to strengthen the ties with the PwD Sector Skill Council in order to explore more possibilities and also to train the trainers of Divyangjan candidates and to focus on Recognition of Prior Learning (RPL) of those differently-abled engaged in Agri-sectors in rural India.

Recounting success stories of several candidates who were trained and placed in the DDU-GKY programme, Smt Alka Upadhyaya mentioned that every candidate associated with DDU-GKY has a journey and a story of success to tell. DDU-GKY is implemented differently from other skilling programmes and has robust standard operating procedures. Smt Upadhyaya stated that it is important to focus on good mobilisation practices without a commercial mindset. It has been proven through a study conducted that if the mobilisation practices are correct, then their placement, retention and career progression will also be effective. Shri Amit Kataria, Joint Secretary (Skills), MoRD speaking on the occasion reminded that both training agencies and employers have to be sensitive to and aware of the challenges our PwD youth faces in terms of barriers that exist in terms of their accessibility to quality education and training programs. A more coherent, and empathetic approach is required to mainstream the requirements of PwD youth and robust processes are to be put in place wherein they become part of the skilling ecosystem and find a way for themselves keeping their self-esteem intact thereby enhancing decision-making abilities. Ministry’s aim is to encourage and promote inclusivity wherein youth from all sections of society can come forward and participate in this process of making India a ‘Skilling Hub’ of the world, he added. This event is an opportunity not only to felicitate the candidates who have overcome challenges in life to carve out a successful career for themselves, but also to reiterate the commitment of the Ministry towards Divyanagjan, he said.

Some of the candidates who received the awards addressed the audience and recounted their life journey and the difference that skill training brought to their lives. Employers and training partners also shared their experiences of skilling and employing the candidates and also put forth suggestions to explore newer directions in the journey of inclusion.