Students and youth must take out at least 75 hours in next one year and involve themselves in nation building: Shri G Kishan Reddy

On the eve of India’s 75th Independence Day celebration today on Saturday, the 14th August 2021, the Ministry of Tourism in collaboration with the Association of Indian Universities (AIU)  held a webinar. During the webinar, a series of 12 episodes was launched that will take the participants on a virtual journey of Incredible India. The event was inaugurated by Union Minister of Tourism, Culture and Development of North Eastern Region (DoNER) Shri G Kishan Reddy. The Union Minister of Education and Minister of Skill Development & Entrepreneurship Shri Dharmendra Pradhan was the esteemed Chief Guest of the event.  Minister of State for Tourism Shri Shripad Yesso Naik, Minister of State for Tourism Shri Ajay Bhat along with Col Dr. G. Thiruvasagam , President AIU, Shri Arvind Singh, Secretary Ministry of Tourism graced the occasion. The Minister of Culture, Tourism and the Development of Northeastern Region (DoNER) Shri G. Kishan Reddy exhorted students to take out at least 75 hours in the next one year and involve themselves in nation building. Speaking at the inauguration of a year-long 12 episode based series of sessions that will take the participants on a virtual journey of India, Shri G. Kishan Reddy, said “We hope that the students will take out at least 75 hours in next one year to do any activity of their choice. This can be participating in Swacch Bharat Abhiyaan in your native villages or involving in a campaign with your village sarpanch or mayor or local representative to hoist the national flag”. He also suggested students to dedicate these 75 hours to any other activities of interest that could include planting trees to increase our green cover, teaching at an orphanage, volunteering at an old age home, or helping in the uptake of digitization and digitally empowering the poor.

In March 2021, “Azadi ka Amrit Mahotsav” started a 75-week countdown to our 75th anniversary of Independence and will end on 15th August, 2023. “Azadi ka Amrit Mahotsav is not only a celebration of India’s 75th year of independence, but also a promise to the future generations that, with their participation, India will continue on the path of growth and progress”, the Minister said. The Minister also spoke about Prime Minister looking at Azadi Ka Amrit Mahostavas an opportunity to develop a common vision for India at its 100th year of independence. “In fact, our youth have the most important role in ‘Azadi ka Amrit Mahotsav’. Prime Minister rightly said that the Mahotsav is not just about the last 75 years of Independence, but a moment to develop a common vision for the next 25 years”. “We need to ensure that the road to 2047 is marked by progress and prosperity. And to achieve this, I urge the youth to become the torchbearers and architects of India@100 as a Vishwa guru”, he added. 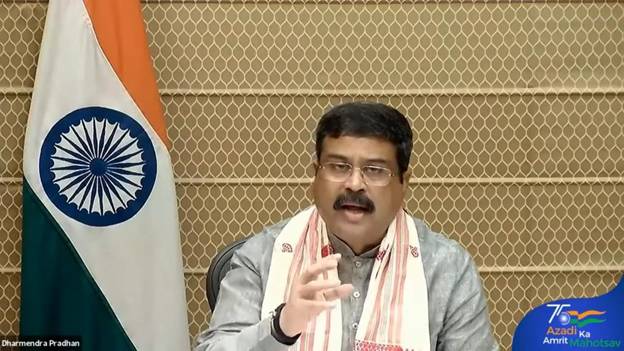 Union Minister of Education and Minister of Skill Development & Entrepreneurship Shri Dharmedra Pradhan spoke about the importance of India’s struggle for freedom which enlighten our path towards progress. He thanked Ministry of Tourism and Association of Indian Universities for an innovative idea of launching programme by keeping in mind the participation of youth and students of our country. Shri Pradhan spoke about the sacrifices of our great Indian freedom fighter Shahid Bhagt Singh, Khudiram Bose, Chandrashekhar Azad and how youth was and is the most important part of our Nation’s development and progress. The relevance of the programme launched by the Ministry of Tourism in association with AIU today wherein the efforts would be taken not only by University Students, but school students will also join this programme. It is preserving of our rich culture and heritage and at the same time move on the path of progress & development. This is our moral responsibility to educate our youth about our glorious past and at the same time prepare them for the path of global leadership. Minister of State for Tourism Shri Ajay Bhat spoke about the Prime Ministers’ vision for celebrating the Azadi Ka Amrit Mahotsav and its importance. 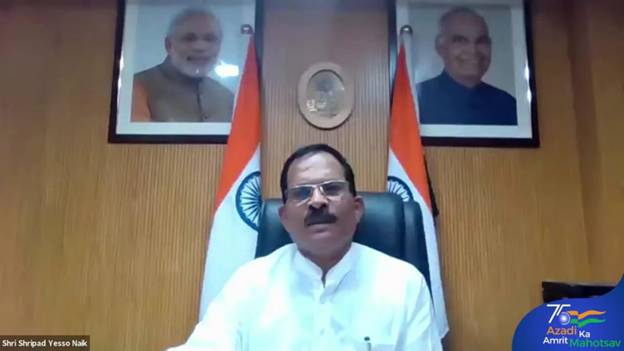 Minister of Tourism for State Shri Shripad Yesso Naik mentioned about the Ministry of Tourism’s initiative to outreach to students and youth of our nation through its famed #Dekho Apna Desh series. Shri Naik further said that this series of 12 episodes will highlight the culture and heritage of India & celebrating the India’s achievements. 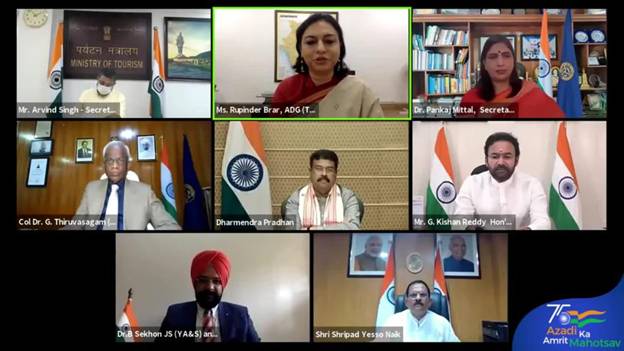 Smt. Rupinder Brar, Additional Director General , Ministry of Tourism welcomed the dignitaries and the attendees. The webinar was started with National Anthem. In the opening remarks, Col Dr. G. Thiruvasagam, President, Association of Indian Universities emphasised on quantum of knowledge and its importance in today’s era. Shri Arvind Singh, Secretary, Ministry of Tourism spoke about the launching of Azadi Ka Amrit Mahotsav a 75 weeklong celebrations of India’s Independence by Prime Minister Shri Narendra Modi in March 2021 from Sabarmati Ashram in Gujarat. Shri Singh further stated that it is imperative that our children and youth are exposed to the rich tapestry of India’s glorious past and a grand future.

The inauguration programme featured live streaming of a 20 minute film titled ‘India@75-A Journey’. The film was conceptualised, written, directed, and brought together by Culturalsamvaad and Ms. Garima Chaudhry. The film is an endeavour to help the youth of India to appreciate the multi-hued fabric of India’s rich and plural culture, her vast heritage, infinite wisdom and her indomitable spirit so that they can shape the glorious further of this ancient land.

In the concluding remarks, Ms. (Dr) Pankaj Mittal, Secretary General gave vote of thanks and spoke about the participation of school students, University students, youth in the programme and holistic development of students. Before the webinar conclude Smt. Brar reminded again about the website where one can record the Rashtragaan in one’s own voice and upload on the website https://rashtragaan.in/

The live webinar was attended by 7,633 people and around 16,800 attended the webinar through social media platforms of the Ministry of Tourism. Till 6 pm 10,650 participated in the online quiz featured on Mygov website.