Total Area Under Organic Farming And Agro-Forestry Along The Ganga Increases From 23,840 Ha To 1,03,780 Ha

Namami Gange Is Not Only A Program For Cleaning Ganga But To Bring Collective Consciousness Among Masses: Shri Bishweswar Tudu

The Minister of State for Jal Shakti Shri Bishweswar Tudu yesterday chaired a meeting of the Empowered Task Force including several central ministries, departments and the state governments for ensuring better coordination and convergence among agencies and programs for holistic rejuvenation of Ganga River and its basin. The Ministries and States provided an update on the recent developments that have taken place and also mapped out their future plans. Among Central Ministries, the Ministry of Agriculture and Farmers Welfare informed that total area under organic farming and agro-forestry increased from 23,840 Ha to 1,03,780 Ha. Out of this, land for Organic Farming in Uttarakhand is 50,840 Ha, Uttar Pradesh is 42,180 Ha, Bihar is 16,060 Ha & Jharkhand is 4,540 Ha. along the Ganga. The Ministry of Agriculture is also working to ensure that shifting to organic farming also boosts farmer’s income, improves water use & crop diversification. States are also using Namami Gange brand for organic farm produce along the Ganga.

The Ministry of Tourism informed that the Ganga Museum in Haridwar is now operational while the one in Rishikesh is ready for inauguration and another Museum in Patna has been sanctioned. The Ministry is also working on developing tourists circuits along the Ganga in Uttar Pradesh, Uttrakhand and Bihar. A Report on architectural, cultural and natural mapping for 38 districts has also been submitted.

Among the States, Bihar has committed to promote production and marketing of organic products under their ‘State Organic Mission’.Uttar Pradesh is working on promoting organic plantation in urban areas& developing Mandis (outlets) in Urban residential colonies to encourage people to buy organic products.       Uttarakhand has started 20 big and 410 small outlets to promote organic products along Char Dham yatra while Jharkhand government has started ‘Organic farming authority of Jharkhand’ to promote organic farming in the state especially along the Ganga. The State of West Bengal has started a massive plantation drive in the Sunderban area. About 15 crore trees will be planted in 3 districts covering 10,000 acres of land. 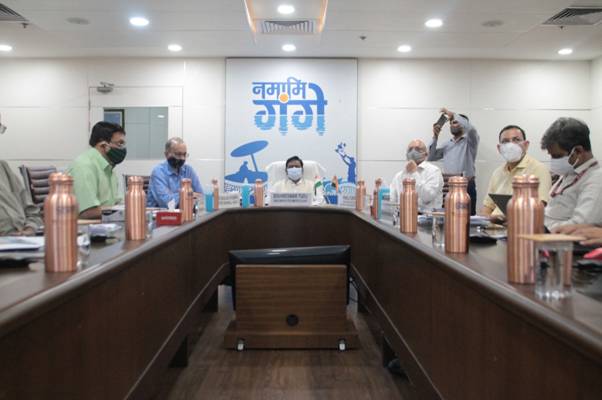