Indian Scientists, along with international collaborators, have measured the magnetic field of an eruption from the Sun’s atmosphere (by observing the weak thermal radio emission associated with the erupted plasma for the first time), offering a rare peek to the interior of the Sun. The study of the phenomenon happening in the Sun’s atmosphere or the solar corona provides insights into the inner workings of the Sun.

The Sun is an extremely active object, spewing out vast quantities of gas in many violent events and the corona is a region of very high temperatures, strong magnetic fields, and violent plasma eruptions. A class of such eruptions are Coronal Mass Ejections (CMEs). CMEs are the most powerful explosions happening in our solar system. When a really strong CME blows past the Earth, it can damage the electronics in our satellites and disrupt radio communication networks on Earth. Hence, astronomers regularly study these events. This field of research helps to understand Space Weather.

A team of scientists from the Indian Institute of Astrophysics (IIA), an autonomous institute of the Department of Science & Technology (DST), Government of India, along with their collaborators, used data from their radio telescopes to measure the magnetic field and other physical conditions of the plasma in a CME detected on 1 May 2016. It was found with the help of radio telescopes of IIA in Gauribidanur, Karnataka, along with some space-based telescopes that observed the Sun in extreme ultraviolet and white light and was caught when the base of its activity was just behind the visible limb of the Sun. This allowed the researchers to detect a much weaker radio emission called thermal (or blackbody) radiation from the plume of gas that was ejected in the CME. They were also able to measure the polarisation of this emission, which is indicative of the direction in which the electric and magnetic components of the waves oscillate. Using this data, they then calculated the physical properties of the ejected plasma as well. The results of the study by R. Ramesh, A. Kumari, C. Kathiravan, D. Ketaki, and T. J. Wang have been published in the leading international journal Geophysical Research Letters.

“Though CMEs can occur anywhere on the Sun, it is primarily those which originate from regions near the centre of the visible solar surface (called the photosphere) like the one we studied that are important for us, since they may propagate directly towards the Earth,” said R. Ramesh, Professor at the Indian Institute of Astrophysics (IIA), Bangalore and the lead author of the paper. “These CMEs are usually studied in visible light, but because the disc of the Sun is so much brighter, we can detect and follow these CMEs only when they have travelled beyond the Sun’s surface. However, radio observations of the thermal emission, like in our study, lets us study the CMEs right from the surface itself”, she added,” said A. Kumari, a co-author.

“Knowing the source region of the CMEs, the associated magnetic field, and their kinematics in the region up to seven lakh kilometer either above the solar surface or off its limb, are important to fully understand the characteristics of the CMEs in a holistic manner,” says C. Kathiravan, another co-author of the study.

For more details, Prof. R. Ramesh (ramesh@iiap.res.in) can be contacted. Caption: A composite of images from observations of the Sun in the extreme ultra-violet, radio, and visible light. The inner red circle is the disk of the Sun, and the outer red circle marks the radius beyond which we have visible light data. The magenta arrow points to the forward part of the CME, as seen in visible light. The cyan and blue contours show the emission at two different radio frequencies, detected by the Gauribidanur RadioheliograPH (GRAPH).

Caption: Observations with radio polarimeter in the Gauribidanur observatory on the day before the CME (30 April 2016), during the CME (1 May 2016) and day after the CME (2 May 2016) over a 30 min period. The blue curves are of the total visible light intensity which has a similar shape on all three days. The green curves are of the polarised intensity, which is high only on the day of the CME. 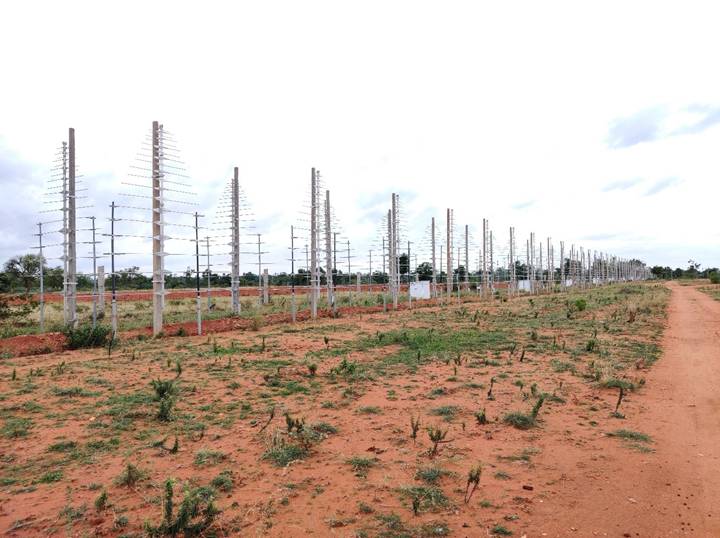 Gossip: The Good, The Bad, and The Ugly
19 hours ago