Focus of policies of Government of India are intertwined with sustainable protection and conservation of public goods and environment: Union Environment Minister

Union Minister for Environment, Forest and Climate Change, Shri Bhupender Yadav has asked all stakeholders including the citizens to sincerely and earnestly contribute to achieve cleaner air and healthier lives for all.

The Union Minister, who was speaking at an event in New Delhi today to mark the second International Day of clean Air For Blue Skies, stated that the Central Government has launched several initiatives to improve air quality in the entire country, with the Prime Minister himself setting a goal for holistic improvement in air quality in more than 100 cities. “86 cities showed better air quality in 2019 in comparison to 2018, which increased to 104 cities in 2020”, informed the Environment Minister.

The Minister said that the Government under the leadership of the Prime Minister is now actively linking all policy approaches to give paramount importance to conserve public goods like water, air and Earth. 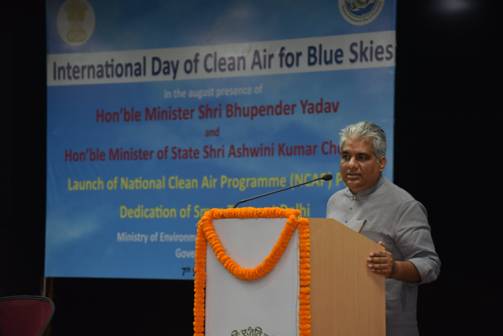 Shri Yadav on the occasion virtually inaugurated the first functional smog tower in India at Anand Vihar, Delhi and expressed hope that the pilot smog tower project will yield fruitful results and supplement the air quality improvement efforts .A smog tower is a structure designed as large/medium scale air purifiers to reduce air pollution, usually by forcing the air through filters.

The focus of policies of Prime Minister Shri @NarendraModi ji’s govt are intertwined with sustainable utilisation, protection & conservation of public goods and environment. Happy to share that on International Day of Clean Air for Blue Skies inaugurated a Smog Tower in Delhi. pic.twitter.com/WA60pDh1xn

The smog tower at Anand Vihar with a height of over 20m, is of downdraft type, i.e. polluted air comes in from the top of the tower and clean air comes out of the bottom is intended for localised reduction in air pollution (Particulate Matter). The filtration system used in the tower has been designed by University of Minnesota with an expected efficiency of 90%. 40 fan units have been installed to provide a design airflow rate of 1000 m3/sec. The tower has been built by Tata Projects Limited with NBCC (India) Ltd. as the project management consultant. 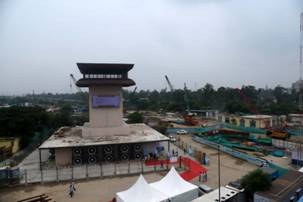 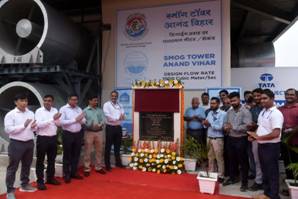 The event also witnessed launch of a portal named “PRANA” – Portal for Regulation of Air-pollution in Non-Attainment citiesunder the National Clean Air Programme (NCAP). Ministry of Environment, Forest and Climate Change and Central Pollution Control Board (CPCB) are implementing National Clean Air Programme (NCAP) in the country since 2019 with targets to achieve 20 to 30 % reduction in Particulate Matter(PM10 and PM2.5  ) concentrations by 2024 across the country. 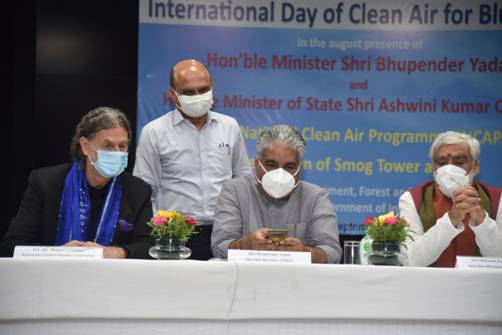 (prana.cpcb.gov.in) will support tracking of physical as well as financial status of city air action plan implementation and disseminate information on air quality to public.

So far, 375.44 crores have been released to 114 cities during FY 2019-20 & 2020-21 for initiating actions under city action plan. Further, 4400 cores have been released to 42 cities with million plus population as per recommendations of 15th Finance Commission report for FY 2020-21. This is in addition to funds available through various Central and State government schemes.

Minister of State in the Ministry of Environment, forest and Climate Change, Shri Ashwini Choubey while addressing the event said that Clean Air is intricately linked to a host of benefits for the human being and gave the slogan “Swachh Pawan, Neel Gagan”, emphasizing that for a Blue Skies we need to work towards making the air clean and stressed on adoption of sustainable lifestyle for all.

The event was also attended by Ms. Payden, Deputy WHO Representative who lauded India’s efforts on tackling Air Pollution and its leadership role on Climate Change. Dr. Antje C. Berger, Counsellor, Climate and Environment, Embassy of the German Federal Republic of Germany who also addressed the event said that technological solutions play a key role in mitigating the Environment Challenges that the world faces today.