Union Minister for Road Transport and Highways Shri Nitin Gadkari will be  reviewingthe progress of Delhi-Mumbai Expressway(DME) on 16th – 17th September covering the States of Delhi, Haryana, Rajasthan, Madhya Pradesh and Gujarat .Being developed at a cost of 98,000 crores, the 1380 km long Delhi Mumbai expressway will be the longest expressway in India. It will enhance connectivity between  National Capital, Delhi and Financial Capital, Mumbai. The expressway will connect urban centers of Delhi through Delhi-Faridabad-Sohna section of the corridor along with a spur to Jewar Airport and Jawaharlal Nehru Port to Mumbai through a spur in Mumbai.

Delhi Mumbai Expressway, envisaged under the vision of  Prime Minister’s ‘New India’, was kick started in 2018 with the foundation stone being laid on 9th March 2019. Out of the 1,380 kms, contracts for more than 1,200 kms have already been awarded and is under progress.

The new expressway is expected to halve the commute time between Delhi and Mumbai from nearly 24 hours to 12 hours and shorten the distance by 130 km. This will generate annual fuel savings of more than 320 million liters and reduce CO2 emissions by 850 million Kg which is equivalent to the planting of 40 million trees. Over two million trees and shrubsare planned to be planted along the highway as part NHAI’s commitment towards environment conservation.

Minimizing environmental and wildlife impact has been a cornerstone for Delhi Mumbai Expressway. The expressway is the first in Asia and only the second in the world to feature animal overpasses to facilitate unrestricted movement of wildlife. The DME will have 3 animal and 5 overpasses with a combined length of 7 km dedicated for unencumbered wildlife movement. The expressway will also include two iconic 8 lane tunnels which are a testament to the engineering prowess of the country, one tunneling through Mukundra sanctuary without disturbing the endangered fauna in the region for 4 kms and the second 4 km 8 lane-tunnel will pass through the Matheran eco-sensitive zone.

The marquee project is an engineering marvel as

DME passes multiple diverse regions such as forests, arid lands, mountains, rivers and extensive work has gone to ensure that the highway stands the test of time. Perpetual pavement design has been adopted for Delhi – Vadodara section, which passes through arid regions and rigid pavement design has been adopted for Vadodara – Mumbai section with high rainfall to increase the longevity of the project.

DME has also created employment for thousands of trained civil engineers and more than 50 Lakh Man days of work.

One other unique aspect of the Delhi Mumbai Expressway is the setting up of 94-way side amenities(WSA) to improve user convenience and safety along the corridor. Way side amenities will house petrol pumps, motels, rest areas, restaurants and shops. These Wayside amenities will also have helipads for increasing connectivity and evacuating people in case of medical emergencies.

The two sections of the expressway, the Delhi – Dausa – Lalsotsection which is part of the Delhi-Jaipur Expressway and the Vadodara-Ankleshwar Section which connects Vadodara to the economic hub of Bharuch are likely to opened for traffic by Mar’ 2022The complete expressway is planned to be completed by Mar’ 2023.

To ensure faster implementation, use of technology was promoted through-out the project lifecycle where advanced technologies such as LiDAR, GPR, Digital maps were used during the preparation of Detailed Project Report followed by use of Drone based surveys, Equipment telematics, pre-casting during the construction stage. Additionally, the packaging of the construction was also planned scientifically to minimize overrun of time through intelligent tendering processes which enabled simultaneous working at multiple stretches. 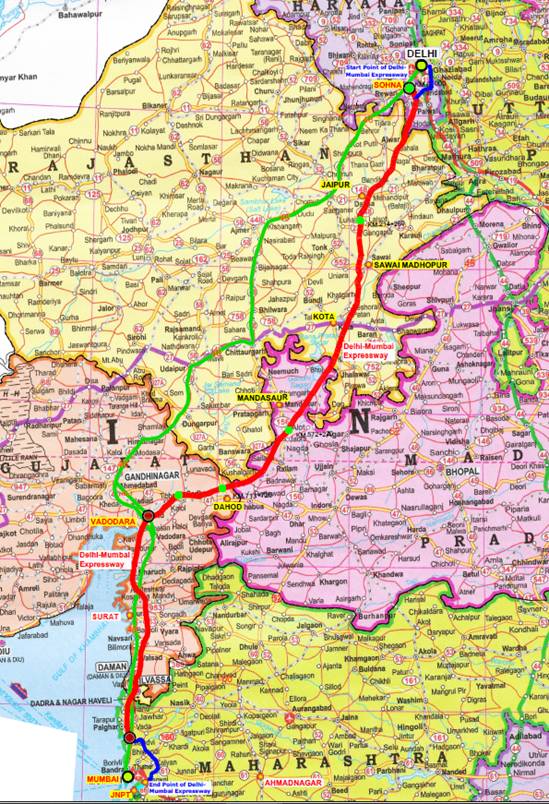