Union Minister Dr Jitendra Singh says, Civil Services have to play an important role in executing New Initiatives, Policies and Programmes to shape the Vision and Roadmap of Prime Minister Narendra Modi in next 25 years


Inaugurates the Foundation Training Programme of ASO (Probationers) of 2018 Batch at ISTM, Delhi

Union Minister of State (Independent Charge) Science & Technology; Minister of State (Independent Charge) Earth Sciences; MoS PMO, Personnel, Public Grievances, Pensions, Atomic Energy and Space, Dr Jitendra Singh today said that entire training curriculum for Probationers has been reoriented because Civil Services have an important role to play in executing new initiatives, policies and programmes to shape the vision and roadmap laid down by Prime Minister Narendra Modi for India for next 25 years.
Speaking after inaugurating the Foundation Training Programme of ASO (Probationers) of 2018 Batch at Institute of Secretariat Training & Management (ISTM) here, the Minister said, they will be the New Architects to lead the caravan and make India a Pre-Eminent Nation, when it celebrates 100 years of independence. He said, Modi has shared his vision for building a New India where the welfare of every citizen is at the heart of national planning and programmes. He said, in the light of this, there is complete reorientation of the entire training curriculum from top to bottom. 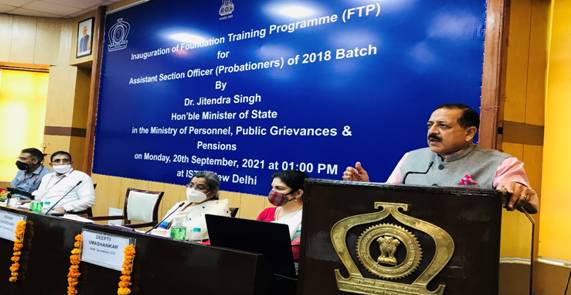 Addressing the Probationers, Dr Jitendra Singh said, “You are joining the service when India is celebrating AzadikaAmrutMahotsav, 75 years of Independence, but the next 25 years are going to be crucial for you as well as for the nation’s growth and progress”. He said, the ASO Foundation Training Programme is one of the first to have been redesigned, incorporating important principles of Mission Karmayogi. He told the Probationers that they are part of the historic batch which will be the first to undergo the revamped “role based” and “competency-based” training.

The Minister said that he would like to see them making maximum use of this redesigned competency based training programme being delivered by ISTM during the Foundation Module, which will empower them to fulfil the expectations of the Nation and its citizens.

Taking positive note of the fact that more than 60 percent of 900 officers are from Engineering or technical background, Dr Jitendra Singh said it augurs well as most of the schemes of the Modi Government in the last 7 Years have a huge scientific orientation and dependence like the JAM trinity, Agriculture and Soil Health Cards, Urban Mobility, Smart Cities, DBT, Digital India, National Highways and Urban Planning to name a few.

Dr Jitendra Singh said that the Government has approved the National Programme for Civil Services Capacity Building or Mission Karmayogi aimed at creating an opportunity of world class capacity building to all Government officials based on the key principle of “role-based” learning, rather than rule-based training. He said, this is nothing but a scientific and objective approach to administration and to prepare oneself for the next role on a scientifically upgraded plane. Dr Jitendra Singh said, Central Secretariat is the nerve centre of functioning of the Government of India. He said, Government has a huge stake in the officers as their role will be crucial not only in proposal formulation but also in monitoring and implementation of the policies. The Minister said that the officers will be working in various Ministries which share the responsibility of country’s security, of the poor, welfare of farmers, interest of women and youth, and securing India’s place at the global platform. “As part of these Ministries’ mandate, you have to be ready to take up the challenges for achieving new goals, for adopting a fresh approach and innovative methods”, he added.

Dr Jitendra Singh informed the trainee officers that he is working towards joint training programmes by institutes which are devoted to capacity building for good governance like, for example, LBSNAA, National Centre for Good Governance (NCGG), Indian Institute of Public Administration (IIPA), Institute of Secretarial Training and Management (ISTM) etc., so that instead of working in silos, there could be synergistic programmes which would supplement the individual efforts made by these institutes.