Panchayats have a significant role to play in effective and efficient implementation of flagship schemes for transformation of rural India: Shri Giriraj Singh Addressing the launching event, Shri Giriraj Singh said that Panchayats are the centre points of grassroots democracy. There are 31.65 lakh elected Panchayat representatives across the country in which 14.53 lakh are women. And, they can bring about tremendous transformational changes in rural areas. Panchayats have a significant role to play in effective and efficient implementation of flagship schemes for transformation of rural India.

The Minister said that this year’s People’s Plan Campaign should be conducted with better people’s participation and each activity as part of the participatory planning should promote a sense of camaraderie and commitment among all citizens to common goals of all-round development of villages. “It is the responsibility of all of us that every Panchayat of the country should formulate such a well-thought-out Gram Panchayat Development Plan so that villages can achieve inclusive and sustainable development in the coming year.” he added.

Shri Giriraj Singh also emphasized on emergent need of meaningful & accountable Gram Sabhas, proper utilisation of funds, raising own source revenues by Panchayats, use of innovation & technology, bridging the digital divide in rural and remote areas, convergence of all the resources available through all the Flagship Programmes under the ambit of Panchayati Raj Institutions and mainstreaming of Panchayat – Women Self Help Groups convergence for women empowerment and involvement of women in income generating activities. Union Minister of State for Panchayati Raj Shri Kapil Patil suggested that Panchayats should create assets from the allocated funds to increase the income sources of Panchayats. He underlined the need for making Gram Sabhas more vibrant. For this, it is necessary to sensitize the masses and instill a sense of trust & confidence in the minds of the people. Strengthening the Gram Sabha is equal to strengthening the backbone of democracy in the country.

Addressing the participants, Sushri Sadhvi Niranjan Jyoti, Union Minister of State for Rural Development emphasised that participation of all the line Ministries / Departments should be ensured in the process of formulation of development plan of the Panchayats under People’s Plan Campaign. It is also necessary to focus on getting the development works done in villages with their own resources.

Addressing the gathering, Shri Faggan Singh Kulaste, Union Minister of Rural Development stressed the need for proper convergence of all Schemes being implemented in rural areas with special focus of tribal areas to ensure holistic development. He said that everyone should work together in the coming days on how the Gram Panchayat Development Plans are prepared by convergence of several schemes of the Central and State Governments.

Shri Sunil Kumar, Secretary, Ministry of Panchayati Raj said that People’s Plan Campaign is being rolled-out in all the States from 2nd October 2021, and all the concerned Ministries/ Departments and States have assured their active support and participation in this campaign. He said that despite adverse impact of the COVID-9 pandemic last year, the People’s Plan Campaign was conducted in a smooth manner adhering to the COVID-19 protocols/ guidelines. “It is a matter of great satisfaction that 2.56 lakh Panchayats uploaded their GPDPs on GPDP portal last year. This year also we are confident that 100% Panchayats will participate in the People’s Plan Campaign. A Vibrant Gram Sabha Dashboard has also been launched today and this dashboard will also help in increasing maximum participation through the meeting of Gram Sabha, Standing Committee meeting of Gram Panchayat, meeting of elected Panchayat public representatives throughout the year”, he added. 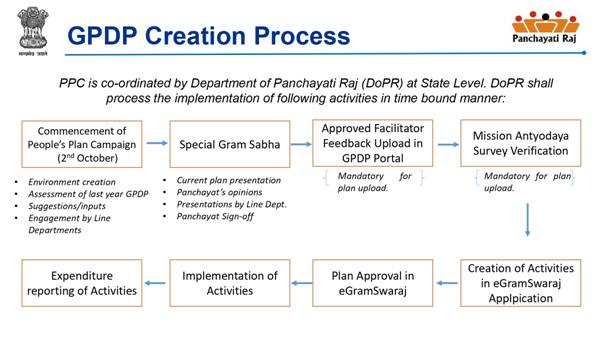 During the campaign, structured Gram Sabha meetings will be held for preparing Panchayat Development Plans for the next financial year 2022–2023. The campaign is being undertaken on a large scale, given the number of Gram Panchayats in the country. Special efforts have been made to ensure maximum participation of vulnerable sections of society like SC/ST/Women etc. The Panchayat Development Plan aims to strengthen the role of elected representatives of Panchayats and SHG Women under DAY-NRLM in effective Gram Sabha. There will be a Public Information Campaign of all programmes in Gram Panchayat office. The structured Gram Sabha meetings will be spread over 2nd October 2021 – 31st January 2022, with physical presence and presentation by frontline workers/supervisors on 29 sectors – Agriculture, Land improvement, Minor irrigation, Animal husbandry, Fisheries, Social Forestry, Minor forest produce, Small scale industries, Khadi, village and cottage industry, Rural housing, Drinking water, Fuel and fodder, Roads, Rural electrification, Non–conventional energy, Poverty alleviation programme, Education, Vocational education, Adult and informal education, libraries, Cultural activities, Markets and fairs, Health and sanitation, Family welfare, Women and child development, Social welfare, Welfare of weaker sections, Public distribution system and Maintenance of community assets.

How to Find a Quality CBD Product?
6 hours ago