Scientists have found that electric tuning of magnetism in certain exotic states of matter can lead to striking optical effects that are useful in some optical devices. They discovered that on application of an electric field, electrons from the top and bottom layers of a special kind of magnetic insulator called antiferromagnetic axion insulator spontaneously deflect in opposite directions. This property called the Hall layer effect allows magnetism of such materials to be effectively controlled by an external electric field leading to electric tuning of magnetism with important applications in next-generation magnetic and optical devices.

A team from IIT Kanpur has stumbled on the ‘layer Hall Effect’ property in a few nanometer thick devices made of Manganese bismuth tellurideMnBi2Te4 layers. Hall Effectrefers to the generation of a transverse voltage in the response of an electric field. It occurs in materials in the presence of a magnetic field. More recently, it has been shown to arise even in the absence of a magnetic field, originating from the ‘geometry’ of the electron motion in a crystalline solid in a paper published in the journal Nature. The IIT Kanpur team led by Prof. Amit Agarwal experimentally observed a new kind of Hall effect called layer Hall Effect in which the top and the bottom layer of the device generate transverse current in the opposite directions, which is made possible by a geometric property of the electron in crystals.

Additionally, the IIT Kanpur team observed that the magnetic state of MnBi2Te4 can be effectively switched by a coupled magnetic and electric field known as the axion field. This study, supported by the Science Engineering and Research Board (SERB) and the Department of Science and Technology (DST), opens up the field for exploration of more exotic transport and optical effects in MnBi2Te4 using the axionic electromagnetic coupling. 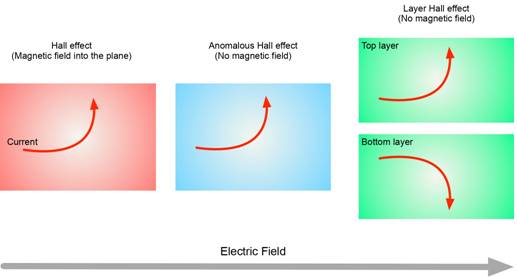 For more details, Prof. Amit Agarwal (amitag@iitk.ac.in) can be contacted.