An Indian researcher has developed low-cost soft, flexible, and wearable sensors that can be used for diagnosis of pulse rate variability in humans. Being a high sensitivity flexible pressure/strain sensor, it can also be used for small and large scale motion monitoring, with potential applications in robotics, prosthetics, as well as minimal invasive surgery and identification of tumor/cancerous cells.

Dr. Dipti Gupta from IIT Bombay has fabricated these tactile (pressure and strain) sensors using low-cost polyurethane foam and nanomaterial-based inks that can coat several substrates with support from the Advanced Manufacturing Technologies programme of the Department of Science & Technology (DST), Government of India. Reduced graphene oxide (rGO) was used as the sensing material. The fabrication of sensors based on reduced graphene oxide (rGO) as the sensing material was challenging due to the intrinsic hydrophobic behavior of graphene oxide inks as well as the agglomeration of graphene oxide flakes after reduction. A reducing agent called hydrazine and a dual-component additive comprising of compounds benzisothiazolinone and methylisothiazolinone in appropriate proportion were used to synthesize rGO ink with a hydrophilic nature. Utilizing this hydrophilic rGO ink mixed with multiwalled carbon nanotubes (MWNTs), a very simple, low-cost approach was found for the fabrication of a pressure sensor based on polyurethane (PU) foam coated with the MWNT−rGO ink (MWNT− rGO@PU foam). The MWNT−rGO@PU foam-based devices were shown to be versatile pressure sensors with the potential to detect both small-scale and large-scale movements.

The research was published in the journal ACS Applied Materials and Interfaces. The technology which can be used to monitor the pulse waveform of a human radial artery in real-time is aligned with the ‘Make in India’ initiative, and Dr. Gupta has applied for 3 national patents for these sensors. The sensors have been tested for their different level of strains like micro and large scale motion monitoring and have potential applications in biomedical devices, skin electronics, and minimal invasive surgery. This frontier technology for wearable and robotic devices applications is in the third stage of Technology Readiness Level, and Dr Gupta further plans to develop a prototype for an array of sensors in the future. 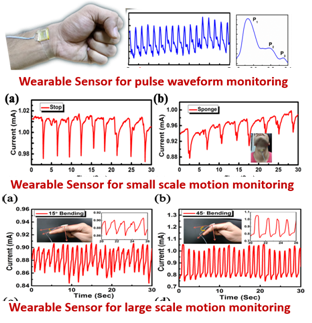