Key decisions announced at the 185th meeting of ESIC


Two new 100 bedded ESIC hospitals to come up in Karnataka

One 30 bedded hospital at Shahjehanpur in UP approved

The 185th meeting of the Employees’ State Insurance Corporation(ESIC) concluded today held at Rishikesh in Uttarakhand saw a slew of important decisions announced by Union Minister for Labour and Employment, Shri Bhupender Yadav. 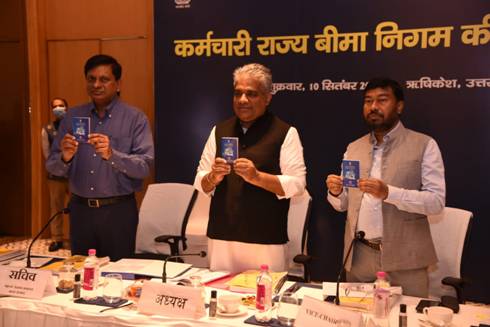 Shri Yadav announced approval of 5-acre land parcels for acquisition to set up new 100 bedded ESIC hospitals at Haroholli and Narsapur in Karnataka, seven new ESIC dispensaries for Kerala among other things.

Stating that the government under the guidance and direction of Prime Minister, Shri Narendra Modi is focused and committed towards targeted delivery of services by ensuring last mile deliveries promptly, the Minister further announced that the ‘’Atal Beemit Vyakti Kalyan Yojana’ is now extended up to 30th June 2022. This is a scheme for unemployment allowance paid at 50 percent of wages for 3 months to those insured persons who lose their jobs for any reason.

During the meeting It was also decided that wherever in-house facilities are not available in ESIC hospitals, patients would be referred to empaneled private medical service providers and furthermore, wherever any ESI facility is at a distance of more than 10 kms from the IP, patients can directly approach the empaneled hospitals for treatment.

One 30 bedded hospital was also approved for Shahjahanpur in Uttar Pradesh and a dedicated earmarked fund was also accorded approval to provide for long term liabilities for the ESIC COVID relief scheme. It was also decided that the ESIC Dental College working from temporary structures at Rohini, in Delhi would be shifted to new building at the ESIC Hospital Basai Dara Pur campus.