Since its launch on 26th July 2014 by the Prime Minister, Shri Narendra Modi, MyGov has more than 18 million registered users today. Almost all Government Departments leverage the MyGov platform for their citizen engagement activities, consultations for policy formulation and also to disseminate information to citizens for various Government schemes and programs.

Amongst the august audience present were MyGov ‘Saathis’ and Stakeholders including top users, winners of contests, Covid warriors and content collaborators.

A free-flowing interactive session between MyGov Saathis & Stakeholders and the Minister of State Shri Rajeev Chandrasekhar and CEO, MyGov, Shri Abhishek Singh was also organised as part of the event. MyGov Saathis and stakeholders including Shradha Sharma, the founder and CEO of YourStory; Padma Bhushan and Padma Shri Pandit Vishwa Mohan Bhatt, a Hindustani classical music instrumentalist; Maibam Ranita Devi, a Manipur frontline health worker who promoted creative dance movement therapy to combat covid 19, treated elderly and terminally ill patients at home and Ashutosh Kulkarni, an IAS Officer, 2020 batch who has worked as MyGov, Solutions Architect from 2018 to 2019, shared their positive experiences of using the MyGov platform, and emphasised the critical role MyGov played during the pandemic.

“With the MyGov platform, we are actually living in a New India. There is an attempt to have proactive two-way communication”: Shradha Sharma, Founder & CEO, YourStory.

“While collaborating with MyGov, through Positive Harmonies, I wanted to convey the message of hope & positivity in the testing times of COVID19” Padma Bhushan Pt. Vishwa Mohan Bhatt.

Shri Chandrasekhar acknowledged their contributions, and added, “I’m absolutely delighted to see how MyGov has grown, not just in terms of the number of people engaged but also in terms of trust & positivity amongst the people of India.”

Shri Abhishek Singh, CEO MyGov, ended the proceedings with a promise, “Today, as we complete 7 years, we rededicate ourselves to citizen engagement in line with the Hon’ble Prime Minister’s goal of making MyGov a mass movement.” 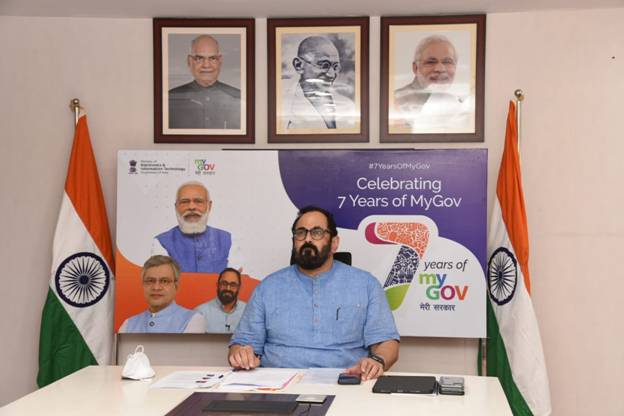