Union Minister for Commerce & Industry & Textiles Shri Piyush Goyal today said that Himachal Pradesh possesses tremendous talent and potential with magical hands that are weaving beautiful art products. He said there is a need to work proactively by the State & Central Ministries to bring these products into the international market in a befitting manner.

Shri Goyal announced that a Weaver Services and Design Resource Center will be set up in Kullu district of the State to encourage attractive handicraft products of the state besides providing a better platform for export of these products in the international market. The Minister was speaking at an interaction programme with handicrafts and handloom artisans organized under ‘Seva & Samarpan Abhiyan’ to commemorate the golden jubilee year of statehood of Himachal Pradesh, in Kullu today. The Minister said that Himachal Pradesh had immense potential for handicrafts and skill up-gradation of artisans, modern equipments and training would be imparted to prepare qualitative new designs in the Weavers Service Center. He said that more attention was needed to modernize the design, quality, packaging and marketing so that the weavers get better price for their products in the international market. Union Minister said that Himachal’s cap is recognized internationally today and there was a need to redesign the same in line with the international requirements in coldest places in the world.

The Union Minister suggested to organize district-wise exhibitions of these products in big cities, people associated with the textile industry and five star hotels so that their branding could be done at national and international level. He asked the weavers to get their trademark for which the central government had reduced the registration fee by 80 percent. 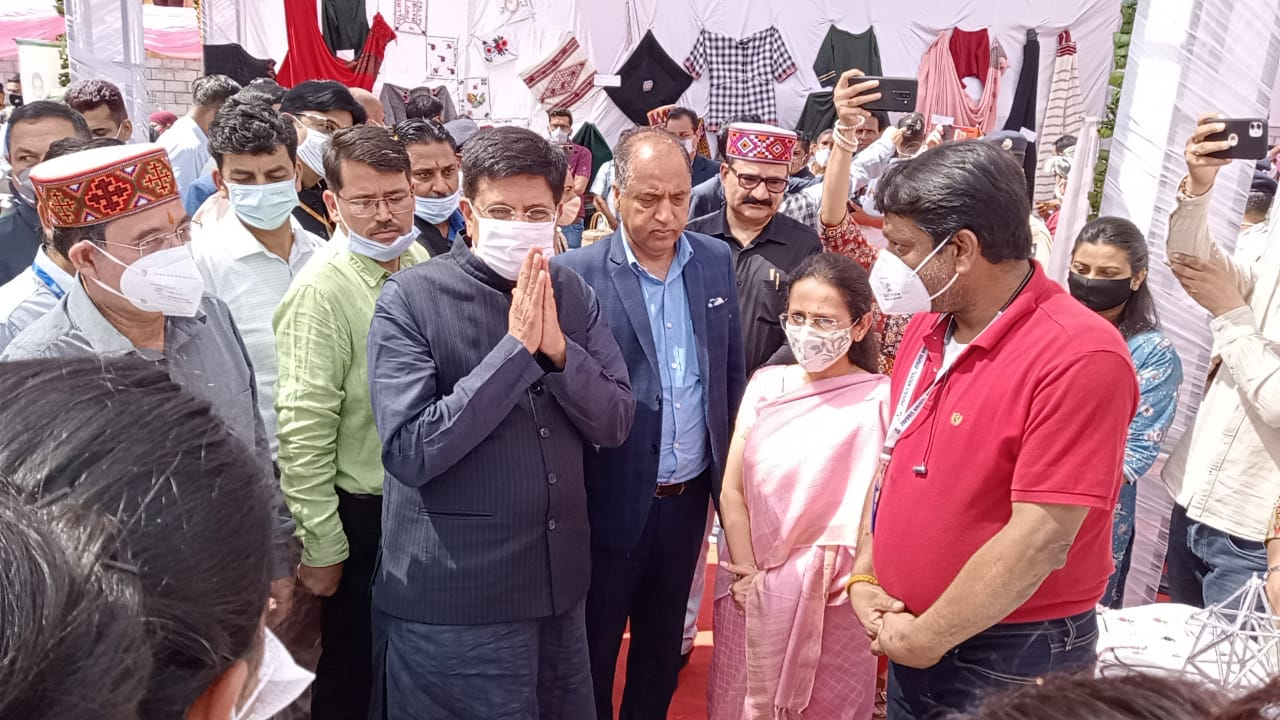 Shri Goyal also interacted with the entrepreneurs of the district and distributed woodcraft, handloom, embroidery machines and certificates to the local handicraft and handloom artisans. He urged the State Industries Department to focus primarily on the ways and means for improvement of the quality of wool used in the manufacturing of handloom and handicraft products.

Applauding the weavers and workers present on the occasion, Union Minister remarked that he witnessed display of pure art and each product is very beautiful and the hands that have manufactured these products are really precious. He however, cautioned that its commercial value has increased a lot in all these years and there is a need to focus on improvement in product manufacturing. The Minister emphasized that there is a paramount need to focus on standardized packaging following designing of products and its manufacturing with appropriate modern marketing. This, he added, would fetch best and right price for the products in international market.

State Chief Minister Shri Jai Ram Thakur on the occasion said that necessary steps had been taken to encourage the artisans of the state. He said that at present, there are 13,572 registered weavers in the state whose livelihood was related to the skill of weaving and embroidery.

Shri Thakur informed that the handkerchief of Chamba along-with Kullu shawl and cap and the shawl of Kinnaur had been given G.I. Tags. He said that in order to facilitate online sales platform for weavers, MoU had been signed with Flipkart and department was also doing online sale of products. Chief Minister said that there had been a big change in the design and quality of handicrafts and handloom products in the state in the last 50 years and thousands of families had made it a means of livelihood.

He said that Kullu districts handicraft especially caps and shawls were recognized internationally. When any head of state comes to India, Prime Minister welcomes him with a kullavi cap and muffler which was a matter of pride for the state. He urged the weavers to preserve the traditional clothes as they were associated with our culture as well.

The Chief Minister said that the tourism sector had been badly affected during the crisis of Covid and the handloom sector was no exception affecting thousands craftsmen. He extended his gratitude to the Union Minister for fulfilling the demand of the state of Weaver Service and Design Resource Center.

The Union Minister and the Chief Minister visited the exhibition put up by the weavers at the venue. A small documentary on handloom and handicrafts was also screened on the occasion.

State Education, Art, Language and Culture Minister Govind Singh Thakur said that Himachal Pradesh was emerging as a model of development under the leadership of Chief Minister Jai Ram Thakur. He said that Kullu district was today recognized internationally by its beauty, rich culture and handicrafts.

Earlier, Union Minister along with Chief Minister also visited ATAL TUNNEL. Shri Goyal appreciated the work of Border Roads Organization (BRO) and described ATAL TUNNEL a marvelous piece of engineering and the pride of the country.