The Vice President, Shri M Venkaiah Naidu today advised the Council of Scientific and Industrial Research (CSIR) to reinvent itself and turn futuristic while pursuing the science of the highest order. Participating in the 80th Foundation Day celebrations of CSIR here on Sunday, he wanted CSIR laboratories and institutes to address challenges that require long-term scientific and technological solutions. In particular, Shri Naidu wanted CSIR to bestow greater attention on agricultural research and come out with new innovations, techniques and solutions to address the problems faced by farmers. He cited climate change, drug resistance, pollution, epidemic and pandemic outbreaks, among the challenges that need the focus of the scientific community. 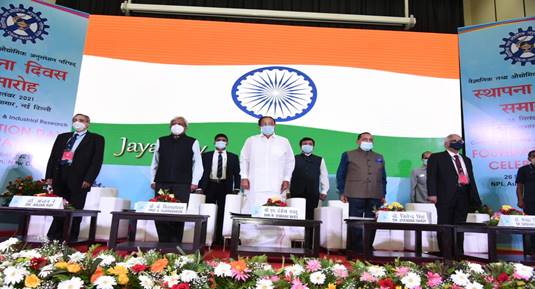 The Minister said, “We should not restrict our ambition to be best in India but be best in the world as India is blessed with the demographic dividend of youth and they can take up any challenge with the right training and motivation”.

Dr Jitendra Singh said, as the Nation is celebrating the Azadi ka Amrit Mahostav, the combined strength of CSIR, DBT, DST and MoES along with other science ministries can indeed transform the entire country in the next 25 years as the entire progress is going to remain heavily Technology dependant. He said, when India turns 100, it should be a global leader ranging from Defence to Economics with strong scientific and technological inputs. Dr Jitendra Singh said that under Prime Minister Narendra Modi’s leadership Science and Technology got enhanced budget and a very special impetus in the last 7 years and the scientific pursuits and endeavors are now being assigned special importance. He said, the ultimate goal of all Scientific Innovations is to bring “Ease of Living” for the common man and pointed out that with this aim in mind Prime Minister took decision to unlock India’s potential in Space Sector, thus paving the way to transform skill, capacity and creativity to make the country self-reliant and technologically advanced. Similarly, country’s atomic energy field was shut behind a veil of secrecy and it was only PM Modi who gave the permission to expand India’s nuclear programme.

Lauding the 80-year successful journey of CSIR, Dr Jitendra Singh said, it is heartening to see the evolution of CSIR from developing India’s first Indelible Ink used in elections to providing Indian Standard time using Atomic Clocks today. From the development of Swaraj Tractor to the recent test flying of HANSA-NG is a testament to the growth of CSIR in the last eight decades, he added.

Referring to the Aroma Mission of CSIR, the Minister said, it has made a difference in the lives of thousands of farmers across India and especially in Kashmir. He said, CSIR’s Aroma Mission introduced a superior variety of lavender in Kashmir, and today, a purple revolution is underway in Kashmir. He also mentioned that CSIR has introduced Heeng cultivation in India for the first time and introduced Saffron in non-traditional areas, apart from its well-known mark in the area of menthol mint.

Dr Jitendra Singh recalled that on the eve of the 75th Independence Day last month, he interacted with farmers and entrepreneurs from UP, Kashmir, Maharashtra and Himachal. One of them, Ms Rupali of Shirdi, set up an agarbatti-making unit from dried flowers discarded from the temples. CSIR provided the machinery and imparted training and today, Rupali employs 200 women in a very successful agarbatti-making unit. The Minister said, these success stories of entrepreneurship and women empowerment need to be replicated across the length and breadth of the country.

Dr Jitendra Singh said, the legacy of CSIR is built on the cumulative contributions of its many national laboratories and institutes. He said, each laboratory of CSIR is unique and specialising in as diverse areas as genomics to geology, material technology to microbial technology and food to fuel. He also recalled that how the laboratories came together during the COVID pandemic last year and developed several technologies that helped India’s fight against COVID.

Finally, Dr Jitendra Singh congratulated all the scientists, researchers and students who have won the prestigious Shanti Swaroop Bhatnagar Prizes and said that the accolades will further motivate the recipients to continue their excellent work and inspire those around them. The Minister said, he was really delighted to see the power of innovation among the winners of CSIR Innovation Award for School Children. He said, they will be the future entrepreneurs, industry leaders, scientists and professors. 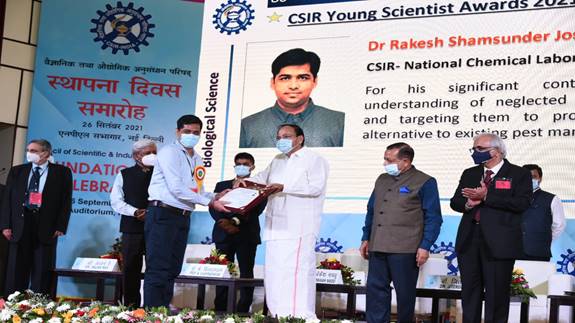