Union Minister Dr Jitendra Singh says, goals and targets set by the Prime Minister for the new UT of Ladakh would be met in time to make it one of the best UTs in the Country.

Common Eligibility Test (CET) will be conducted across the country from early 2022 and Ladakh will have two centers at Leh and Kargil, says Dr Jitendra Singh

For the convenience of the youth aspirants, Ladakh will have its own exclusive centre for holding of Civil Service Exam, which will be set up at Leh and will become functional next month with the holding of Civil Services (Preliminary) Exam. Similarly, the Common Eligibility Test, planned through the recently constituted National Recruitment Agency, will have one Centre each in the districts of Leh and Kargil respectively.

This was announced by Union Minister of State (Independent Charge) Science & Technology; Minister of State (Independent Charge) Earth Sciences; MoS PMO, Personnel, Public Grievances, Pensions, Atomic Energy and Space, Dr Jitendra Singh who said that goals and targets set by the Prime Minister for the new UT of Ladakh would be met in time to make it one of the best UTs in the country. Inaugurating a two-day workshop on Capacity Building for Ladakh Officials at Leh, the Minister said, the historic decision taken by PM Narendra Modi on 5th August 2019 will bring all new possibilities to this new UT as Prime Minister is persistently pursuing its development agenda. 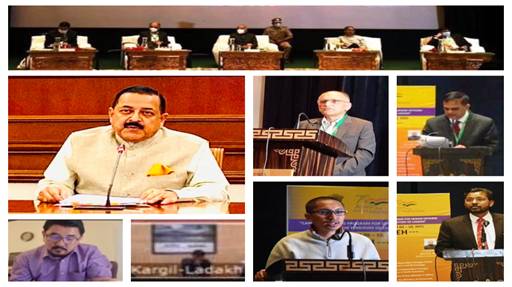 Dr Jitendra Singh said that a Common Eligibility Test (CET) will be conducted across the country from early 2022 and Ladakh will have two centers at Leh and Kargil to screen/shortlist candidates for jobs in Government sector for which recruitment is presently carried out through the Staff Selection Commission (SSC), Railway Recruitment Boards (RRBs) and Institute of Banking Personnel Selection (IBPS). He said, this is not only a Governance reform but a huge Social reform for the job aspirant youth living in remote and far flung areas. The Minister said this historic reform will provide a level playing field to all the candidates, regardless of his or her background or socio-economic status. There will also be a huge benefit to women and Divyang candidates and for those who find it financially unaffordable to appear for multiple tests by travelling to multiple Centres, he added.

Dr Jitendra Singh also informed that Union Public Service Commission (UPSC) will, from this year, have an Examination Centre at Leh, which will operate for the first time for the Civil Services (Preliminary) Examination 2021, scheduled to be held on 10th of October this year. He said, this will address a long pending demand of the youth from the Ladakh region whose grievance was that they found it difficult to reach Examination Centres in other parts of the country because of the constraints of affordability of air fare and uncertain weather conditions.

Dr Jitendra Singh said, ISRO is also working on to set up Night Sky Planetarium at the Indian Astronomical Observatory, located in Hanle near Leh. He said, CSIR will soon have an exclusive plan to promote, process and do the business of the famous Ladakh fruit called Leh berry. Referring to Prime Minister’s highest priority for Ladakh and other peripheral regions, he said it was for the first time under the Modi government that Ladakh had been granted a university, Hotel management institute, a medical and an engineering college. He also underlined the action plan for “Carbon Neutral” Ladakh as announced by Shri Modi.

Dr Jitendra Singh said that soon after taking oath as Prime Minister on 26th May, 2014, one of the earlier reform mantra given by Prime Minister was the maxim “Minimum Government – Maximum Governance”. He said, in the last 7 years a series of reforms was undertaken to encourage greater efficiency, transparent and corruption free governance, accountability and reduce scope for discretion. Referring to a series of path-breaking and out of box decisions since May 2014, he said that the decision to do away with the time old practice of getting documents attested by a gazetted officer and replacing the same with self-attestation, abolition of interview for all Group-B (Non Gazetted) and Group-C posts in the Central Government from 1st Jan 2016 itself, amendment in the Prevention of Corruption Act, 1988 and three-month Central Government stint as Assistant Secretaries for IAS officers in the beginning of their career are far reaching in nature. Dr Jitendra Singh emphasized that all these reforms and best practices are now applicable in the Newly created Jammu and Kashmir and Ladakh post 5th August 2019.

In his address the LG, Ladakh Shri R.K.Mathur said that ever since the new UT came into being, Prime Minister is personally pushing out in every Central Ministry and Department the development paradigm of Ladakh. He said, there are some challenges for building completely new Administrative Structure in Ladakh as there are shortages of officers and they have to get familiar with new laws, rules and procedures. Shri Mathur complimented DAR& PG for organizing the Capacity Building workshop and said this will go a long way in imparting training to officials of the UT. He said, every citizen of Ladakh can now redress his or her grievance through CPGRAMS as it has become operative in Ladakh.

Shri Sanjay Singh, Secretary, DAR&PG, said in his address said that the Capacity Building Workshop is the first ever such event being held in Ladakh, which will truly empower the Government officials to become fully familiar with the Union laws on procurement and financial management, Central Secretariat Manual of Office Procedure(CSMOP), eOffice, adoption of GeM and digital governance. Referring to Prime Minister’s 3 basic tenets of Reforms-Minimum Government-Maximum Governance, shift from rule based to role based approach and next generation reforms, Shri Sanjay Singh said, these will help in creating a new ecosystem of Administrative Structure.

Gossip: The Good, The Bad, and The Ugly
19 hours ago